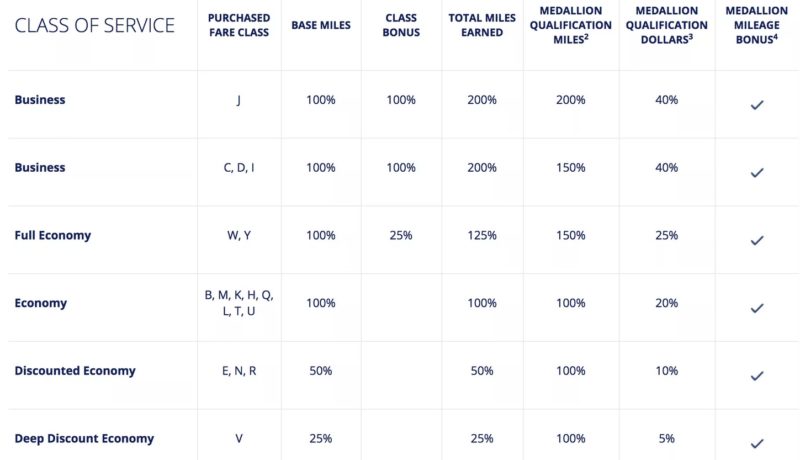 There's a distinction between normal, everyday SkyMiles and Medallion Qualification Miles (MQM's). Regular SkyMiles (RDM's) are those that you can utilize to redeem award tickets and other prizes. While MQM's are utilized solely to determine your qualification for Medallion status within the SkyMiles program, which provide a number of extra benefits not available to general SkyMiles members.

When flying on Delta, SkyMiles are earned based on the total ticket price of a flight (base fare and carrier imposed surcharges, excluding government imposed taxes and fees) for Delta marketed-and-operated flights. A maximum of 75,000 SkyMiles can be earned on a single ticket.

When booking a flight on Delta, the number of miles you can earn per dollar as a SkyMiles member ranges from 5 to 11 (without the Delta Air Lines Credit Card).

In contrast, partner marketed flights that are not ticketed by Delta Air Lines earn SkyMiles based on the percentage of distance flown as determined by the fare class paid.

Flying on partners is a great way to earn extra RDM's and MQD's (Medallion Qualification Dollars), you'll generally earn the same MQM's regardless of who's ticket or who's metal you're flying.

When flying with Aeromexico for example this is how much you will earn:

Here you can see how much you'll earn with other partners.

In general, if you are flying to Europe we would consider to buy AirFrance or KLM ticketed flights, to South America Aeromexico ticketed flights, as you'll earn most of the time more Skymiles (RDM's) and more Medaillaon Qualification Dollars (MQD's) as with Delta Air Lines ticketed flights.

As an example, a busness class flight from New York to Mexico City gives you around 8300 RDM's with Aeromexico and only 4100 RDM's when ticketed with Delta Air Lines.

In fact you don't need to fly with an other partner, it is enough that the flight is ticketed from a partner.

Next week we will write about alternative ways to earn SkyMiles