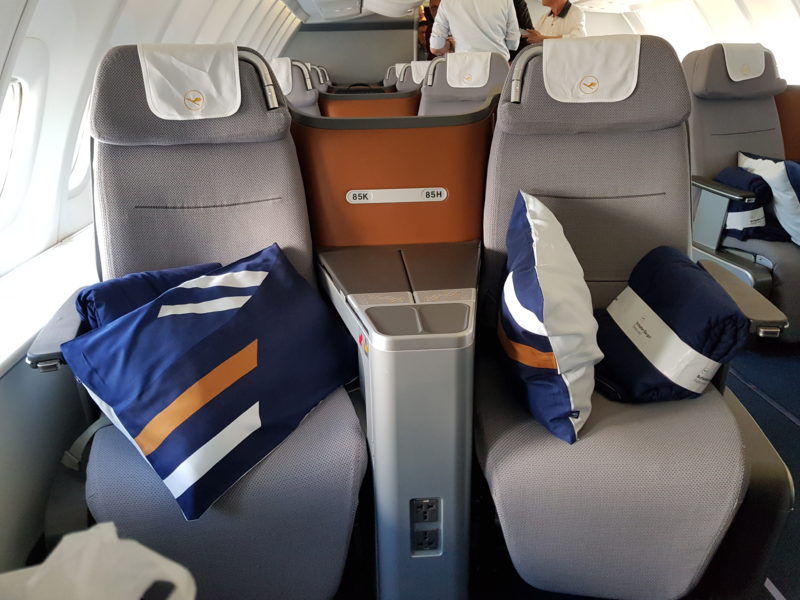 Review of an 11-hour overnight flight from Frankfurt to Tokyo Haneda, in Lufthansa business class.

Boarding was very efficient, we waited just a minute before heading towards the plane.

The flight was operated by a Boeing 747-800i, we were seated on the upper deck. We departed from Terminal 1, Z gates in Frankfurt to land in Tokyo Haneda, international Terminal 1. 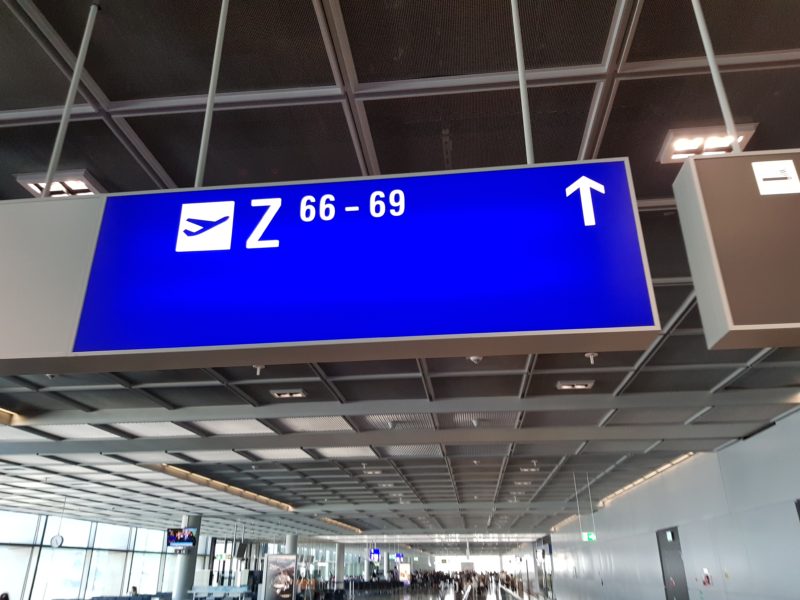 The seat is very comfortable in the upright position, even if it is a bit narrow.

In the lie flat position, you have to put your feet into a small compartment, which is very narrow.  If you do not lie on your back, you might feel a little uncomfortable, especially if you prefer to sleep on your side.

The storage compartment is of a smaller size, but in the upper deck you have plenty of storage room under the windows.

One thing to mention is that each couple of seats is faced slightly towards each other. This could be very odd in the lie flat position if you are sitting near a stranger. I bumped into my wife's knees a couple of times during the night.

Each seat had its own power socket and pretty good noise-cancelling headphones from Bose. 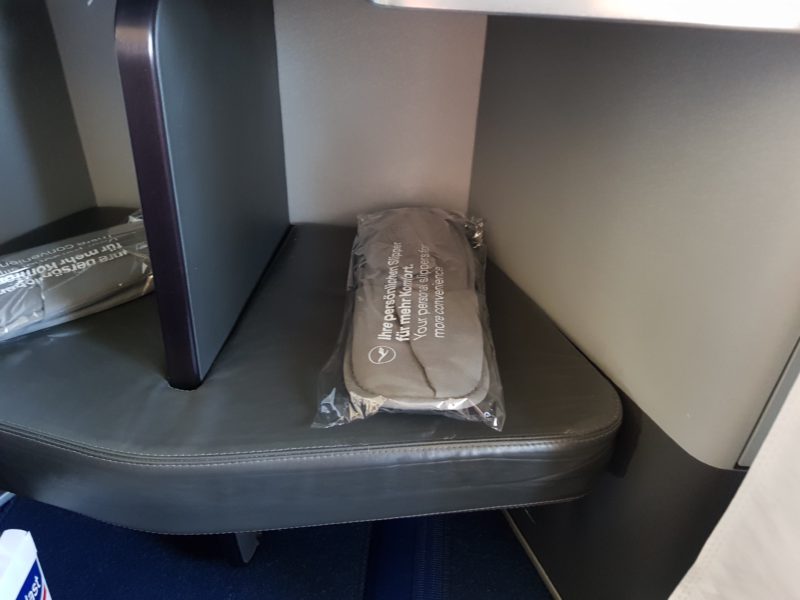 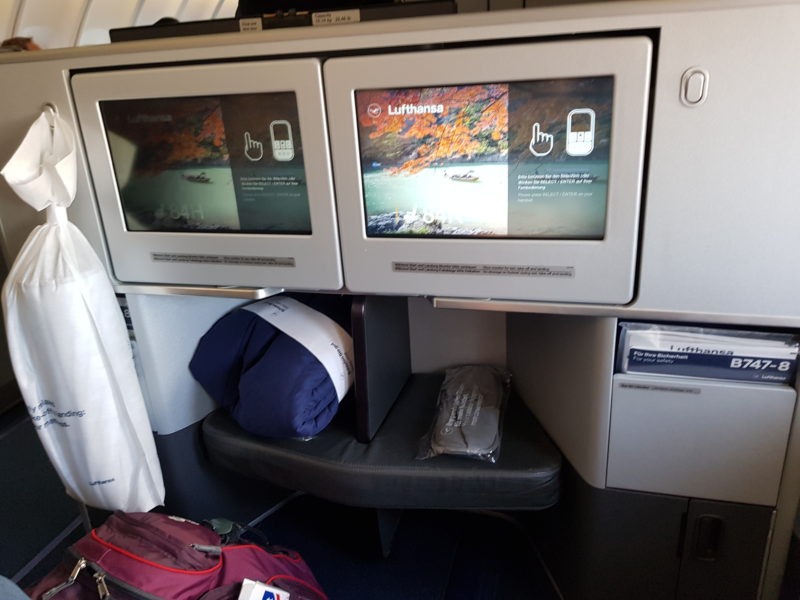 Foot compartments too close together 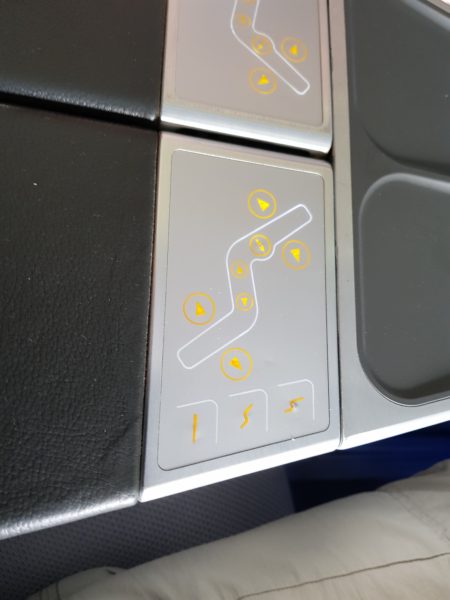 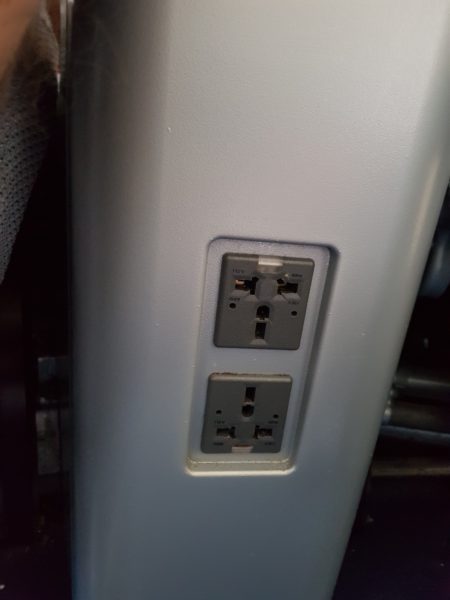 The amenity kit from Lufthansa is provided in a small foldable bag, which looks surprisingly nice and is a useful gift. The standard items are contained in it, as you can see in the picture. 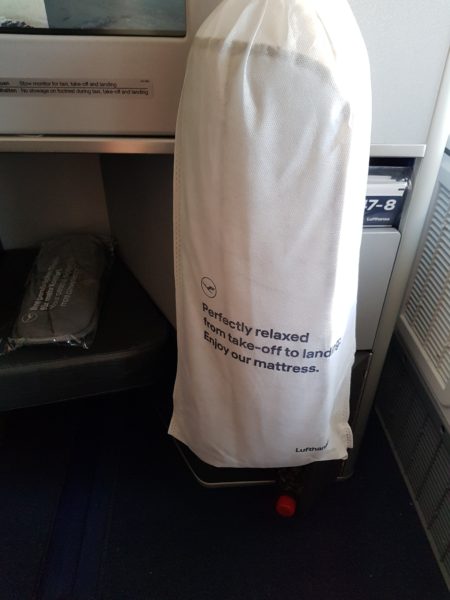 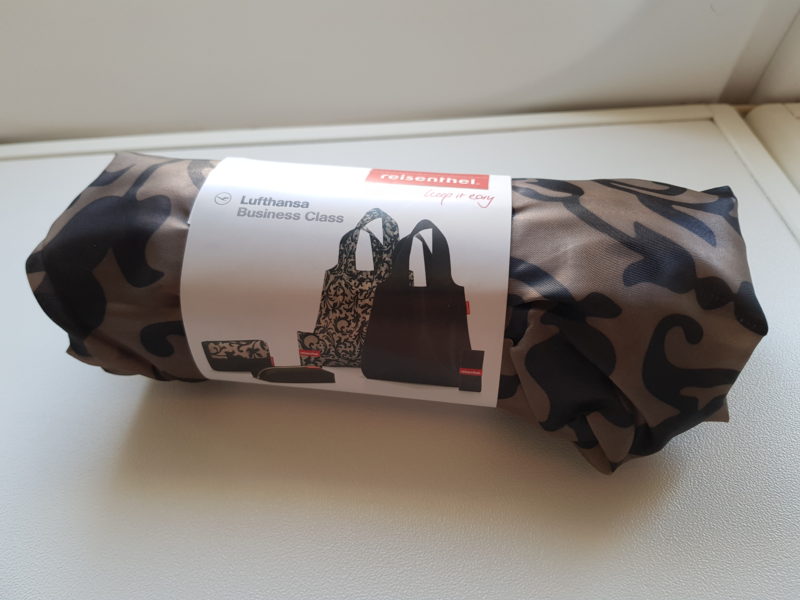 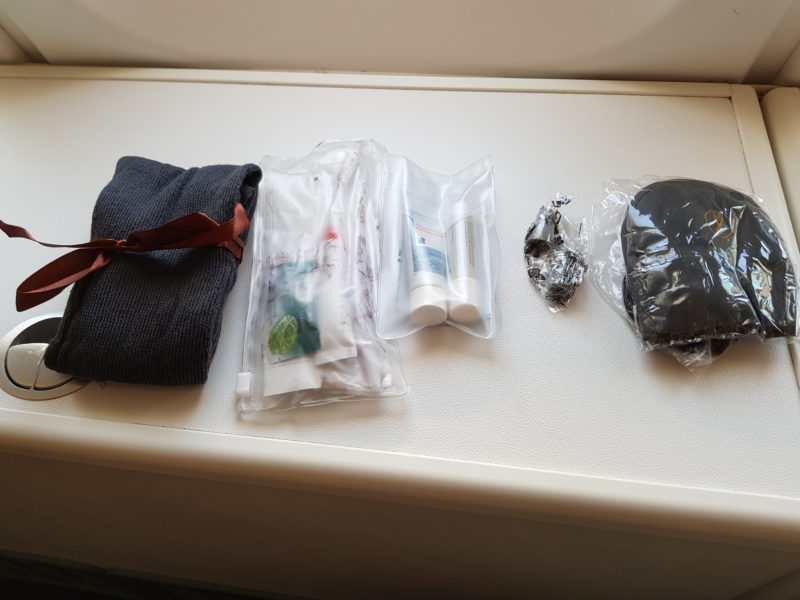 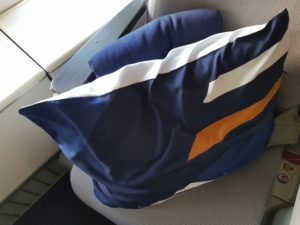 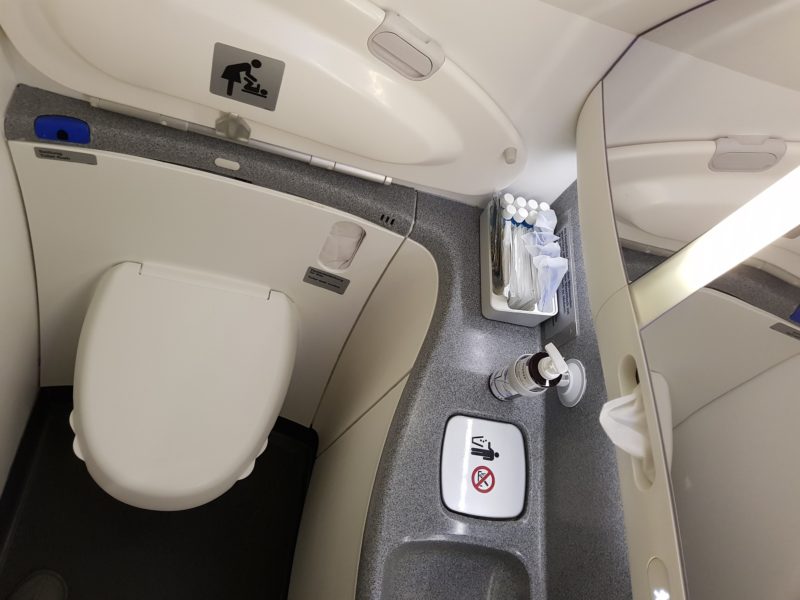 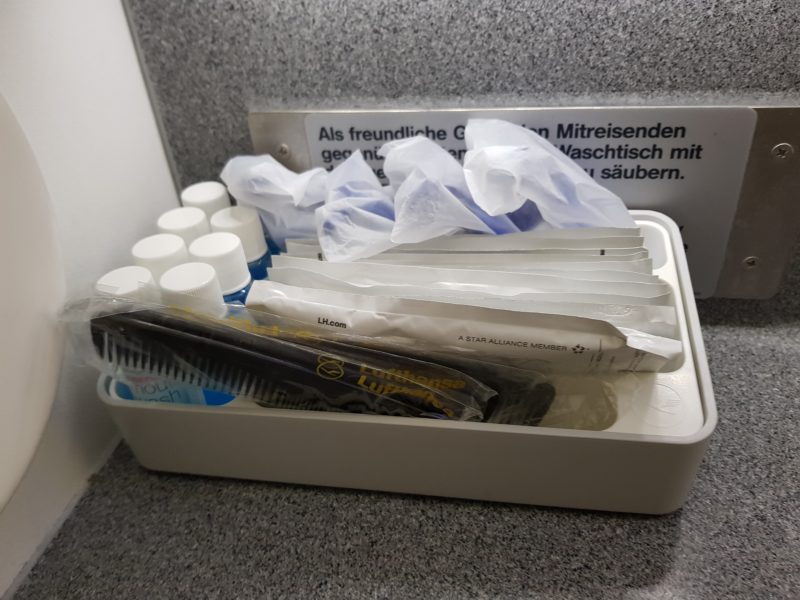 The new bedding option for Lufthansa business class is definitely a big improvement. The pillow as well as the blanket are fluffy and very comfortable. The mattress pad is a small improvement, but does not provide much extra comfort. Here a second layer covering the whole set would have been nice.

Each seat has a big high-resolution screen with plenty of Movies, Shows and more to choose from. You could also select different magazines.

Wi-Fi was also available for a reasonable price of 17€ per flight. Unfortunately, the speed is rather slow as you can see in the picture below, where I performed a speed test.

We got a pre-departure drink (sparkling wine, water or orange juice). Thereafter, you could pick from a solid list of drinks.

In terms of food, you could choose between European or Japanese Dinner and breakfast. I opted in for the Japanese ones, and I was surprised how tasty everything was, but you can judge and see that for yourself in the pictures. 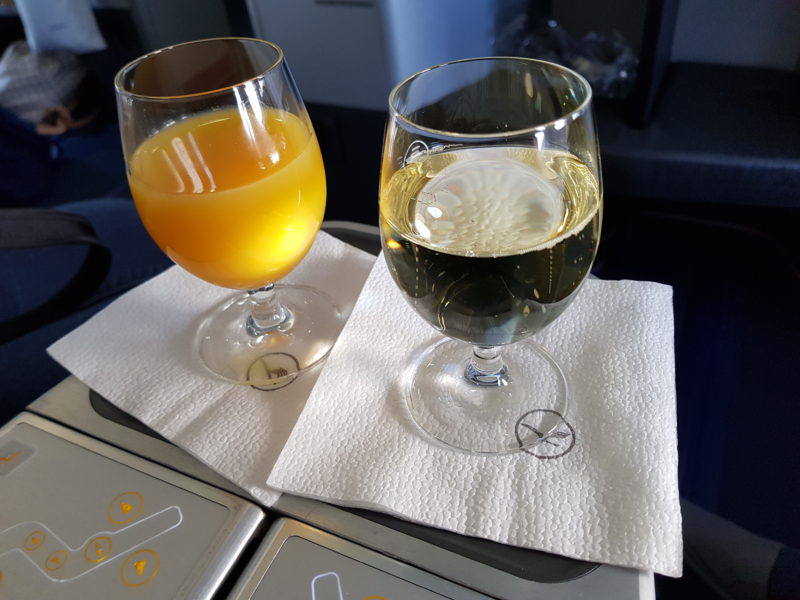 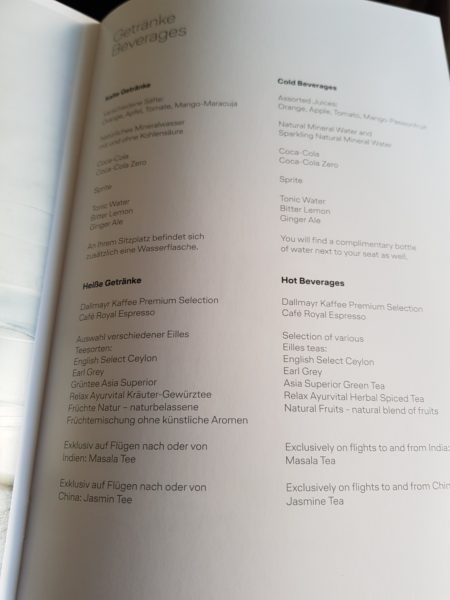 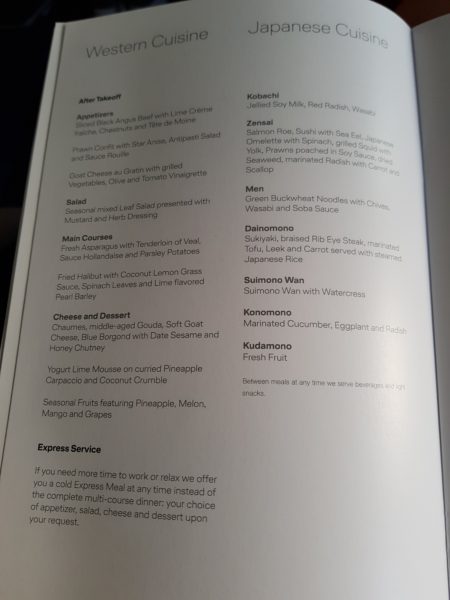 Like most of the time when flying with Lufthansa, the staff was very friendly and attentive. There just was a problem with the serving of the food. It took the crew 4 hours into the flight until everything was served, which is a nightmare on an international overnight flight.

The starter of my wife was still half-frozen, but after pointing it out she immediately got a new one which was perfectly fine for her. Probably there was an issue with one of the food heaters, the crew however apologized a couple of times.

Another thing I did not like was that they used the space on top of the screens of our seat as a table when serving drinks. There is enough space and I had no problem with that most of the time, however I woke up because the crew was chatting in front of the seat while preparing the breakfast, before the cabin was lightened up.

Top of our screens used as a table

With the new bedding, Lufthansa has definitely made a step towards the right direction. I would not mind flying with them in business class on intercontinental flights again, but only as a couple, the seat layout is outdated, and seats are as well too narrow, due to the small foot compartment.

Food and service was great, however the delay with serving the dinner is something that should never happen during an overnight flight.

All in all, you can fly with Lufthansa in Business class, but meanwhile there are many better options with other airlines available.