Ultimate Guide for Qatar Airways Qsuite, all routes with the corresponding flight numbers, registration numbers, when airplanes will be retrofitted and more.

In our list below, you will be able to see how often a route is operated by an aircraft that is equipped with a Qsuite cabin.

We try to update the list as fast as possible when changes occur. If you see that a flight is missing, we highly appreciate your feedback. (last update 05NOV22)

Warning, the following information is not binding in any way. Qatar Airways can change flight equipment at any given time without further notice, for example if an aircraft is out of service or for any other reason. As you booked a business class flight, you will of course be in business class, but without QSUITES.

According to an old Twitter message from Qatar Airways, you may in that case rebook your flight or get a refund.

“If the change to non-Qsuite is verified, you are entitled to

and 2) refund without the cancellation fee“

On our blog premium-flights.com, we publish every day new business class deals from North America and from Europe, and from time to time those with Qatar Airways Qsuites, when good deals appear.

Some destinations listed below are not operated every day by planes with a QSUITE cabin. By clicking on the flight number you will be redirected to planefinder.net where you can see the last 20 flights with this registration number, for that corresponding flight.

These flights are always to/from Doha, as with exception to only a few, all Qatar Airways flights are flown via Doha.

2. How to check if a Qatar Airways flight offers the Qsuites?

The way you can check if an aircraft has the QSuite Business Class cabin is from the seat map. We use ExpertFlyer to check the seat maps, but SeatGuru works as well. …then the flight will be operated with a QSuite cabin. …then you’re looking at an older model Business Class cabin and NOT the QSuite cabin.

The A350-900 and 777-200LR Business Class cabins will also look very similar to the image above if they offer the QSuite product.

3. How many Qatar Airways planes are equipped with Qsuites?

The Boeing 787-9 has a different Qsuite cabin, also called Qsuite 2.0 by some people.  The seats are arranged in a herringbone pattern, in a 1-2-1 configuration, and each suite has as well direct aisle access with a sliding door. The 2 seats in the middle can be transformed as a double bed.

Models below will never receive a Qsuite cabin:

4. Overview of Qatar Airways planes with a Qsuite or Qsuite 2.0 cabin by registration number 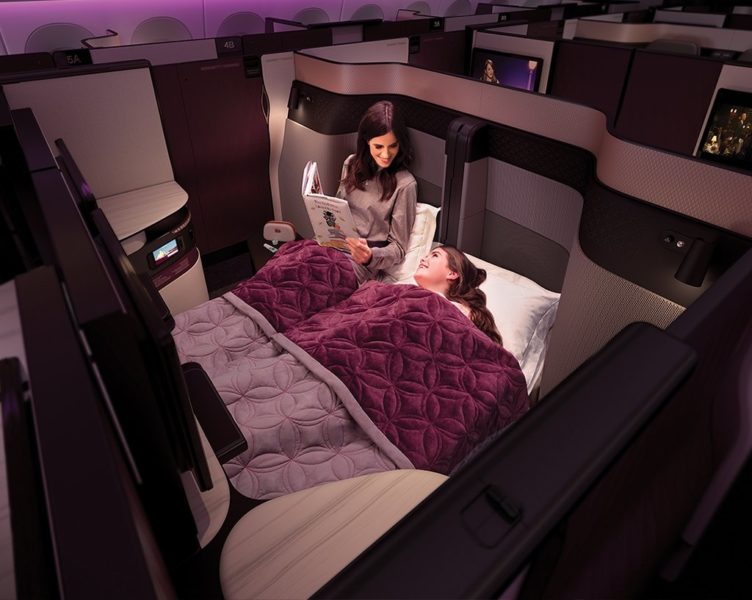 Qatar Airways is a Oneworld member, that gives you a few choices for using airline miles to book a flight with Qatar Airways and their Qsuite.

Below a few good examples on how you can fly with Qsuites and how many miles/avios you would need for a flight. Of course many other routes are available, we just like to show you a few examples where you don't have to use 100,000s miles.

British Airways award chart is distance-based, if a distance increases only by a few miles you will have to spend a lot more avios. Therefore, you need to know which airport to choose so that it still makes sense to buy a ticket with avios.

BA Club Suite routes can be found here below:

How many Qatar Airways planes are equipped with Qsuites?

How many destinations are operated by Qatar Airways Qsuites?

Around 40 destinations in Europe, Asia, North America, South America and Oceania are operated by the airplanes with Qsuites installed.

Which loyality program to use best for Qsuite Award bookings?