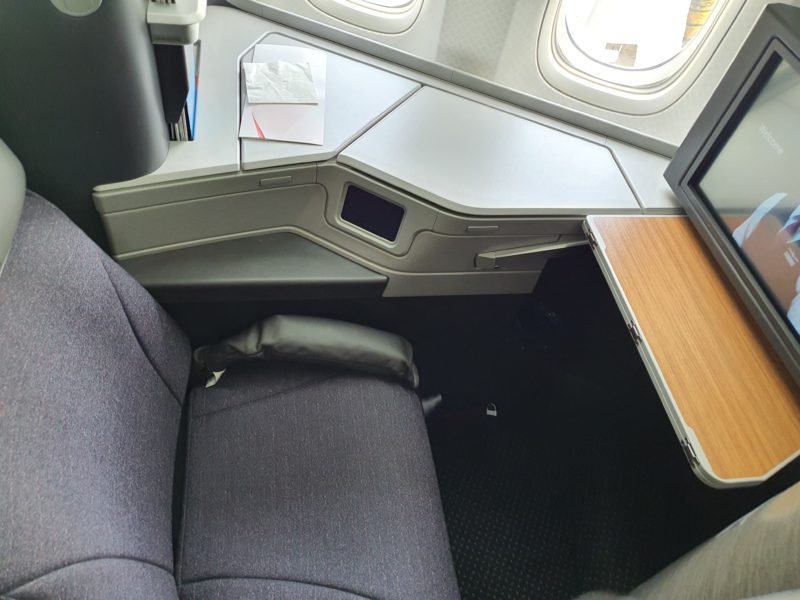 Flight Review American Airlines Business class B777 Paris to Miami in spring 2020. The Worst service ever?

Boarding was efficient and divided into different groups. Business class customers board with Group 1, the first group, so you will be one of the first passengers entering the aircraft.

Wi-Fi was available on that aircraft for $16 for the entire flight, but the internet speed was very slow.

The seats are in a 1-2-1 reverse herringbone configuration.

We occupied the middle seats of the first row so a large flat space was available in front of our seats. This feature was really nice, especially to deposit our used glasses or plates as the service was not very fast.

The seats are lie flat, and I was surprised by the amount of privacy available despite having the middle seats. To see or talk to each other you literally have to lean forward to see your partner. This might be ideal for strangers, but no so much for couples. Unfortunately these days, at most airlines, middle seats are either great for single flyers or for couples.

I think the seat was very comfortable despite the lack of extra bedding. I took a nap without having aches afterwards. The seat is also long enough even if you are over 1m85 tall. The foot compartment offers enough space so that your feet will not feel to cramped after a nap. 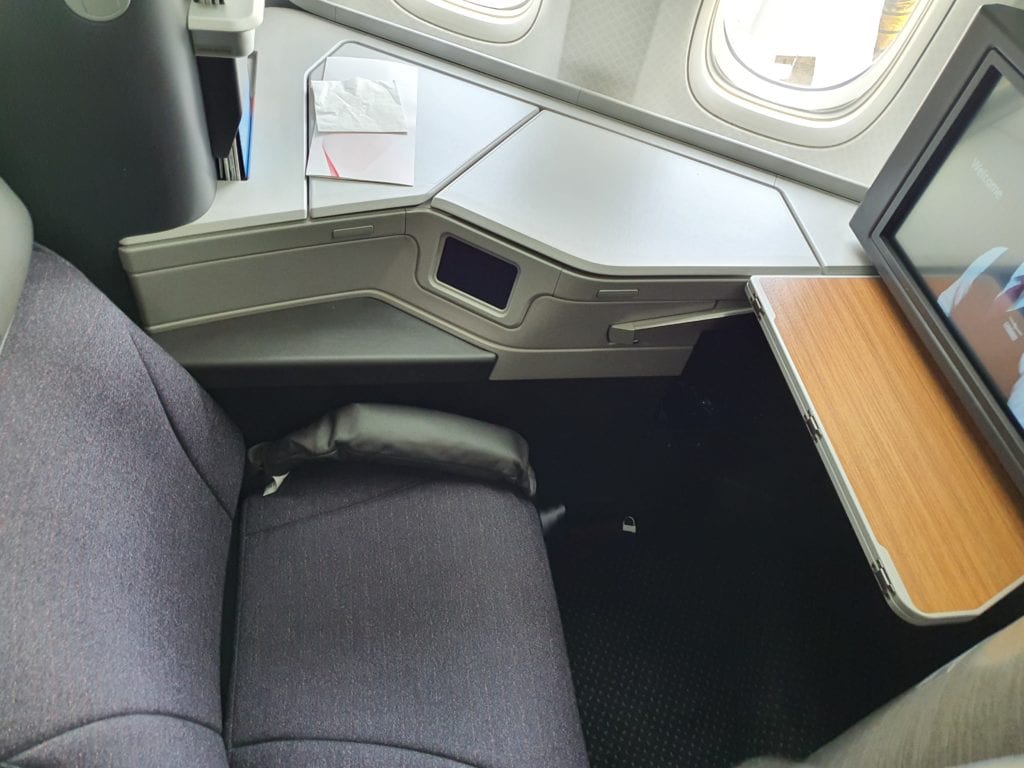 This is one of the business classes where you have more storage options at your disposal. Two small closing compartments, one in which the power socket and remote are stored, and one available on one side.

Furthermore, you have one bigger open compartment near your feet and another closed storage box for your headphones in the arm rest.

The entertainment screen is of an adequate size and of a good quality. 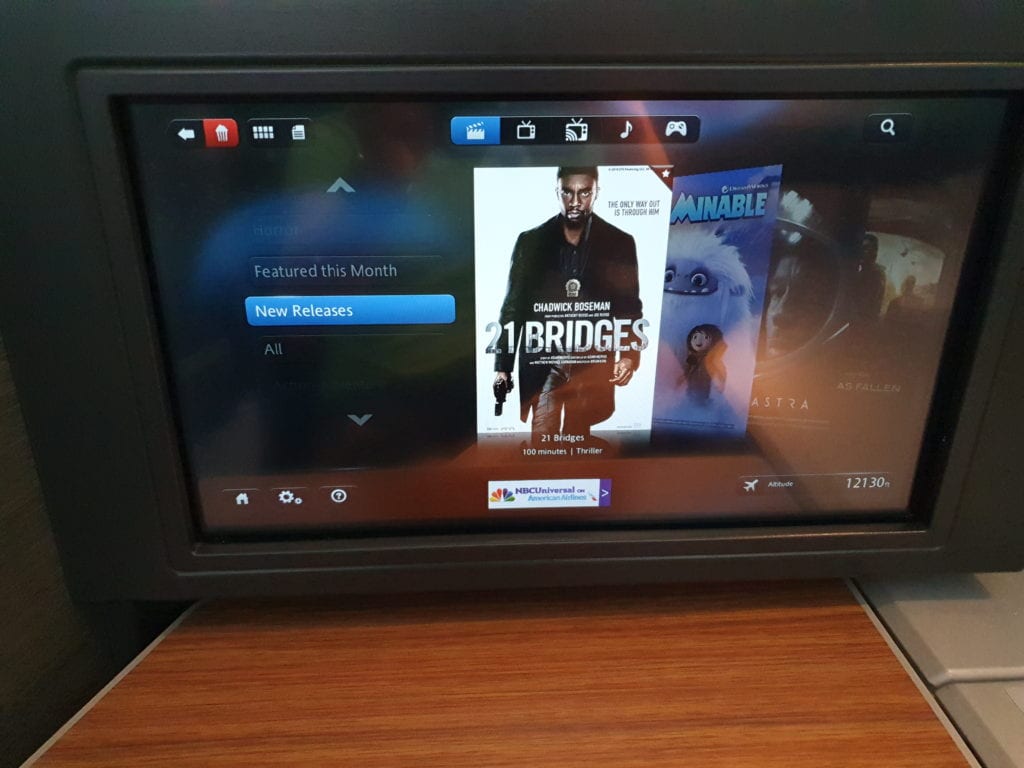 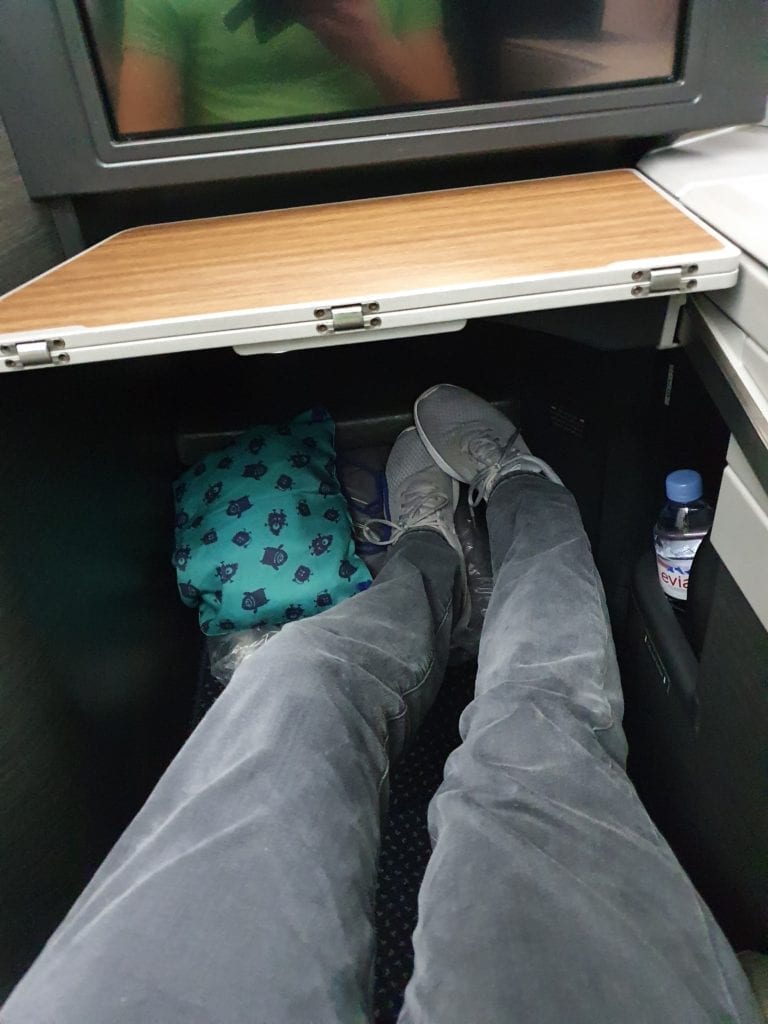 An international power socket and  2 USB ports are available within a storage compartment. 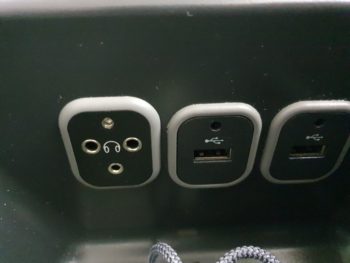 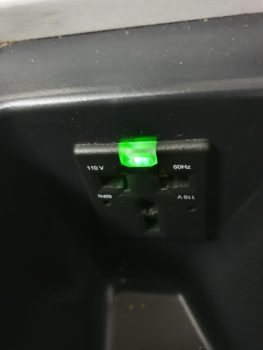 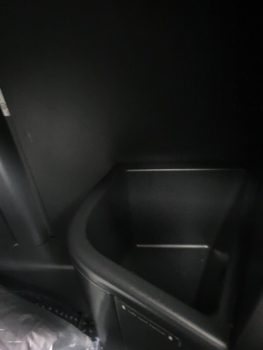 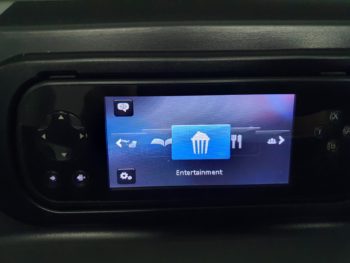 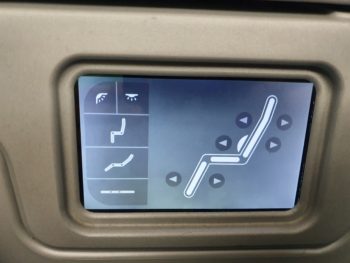 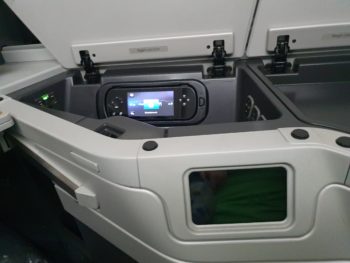 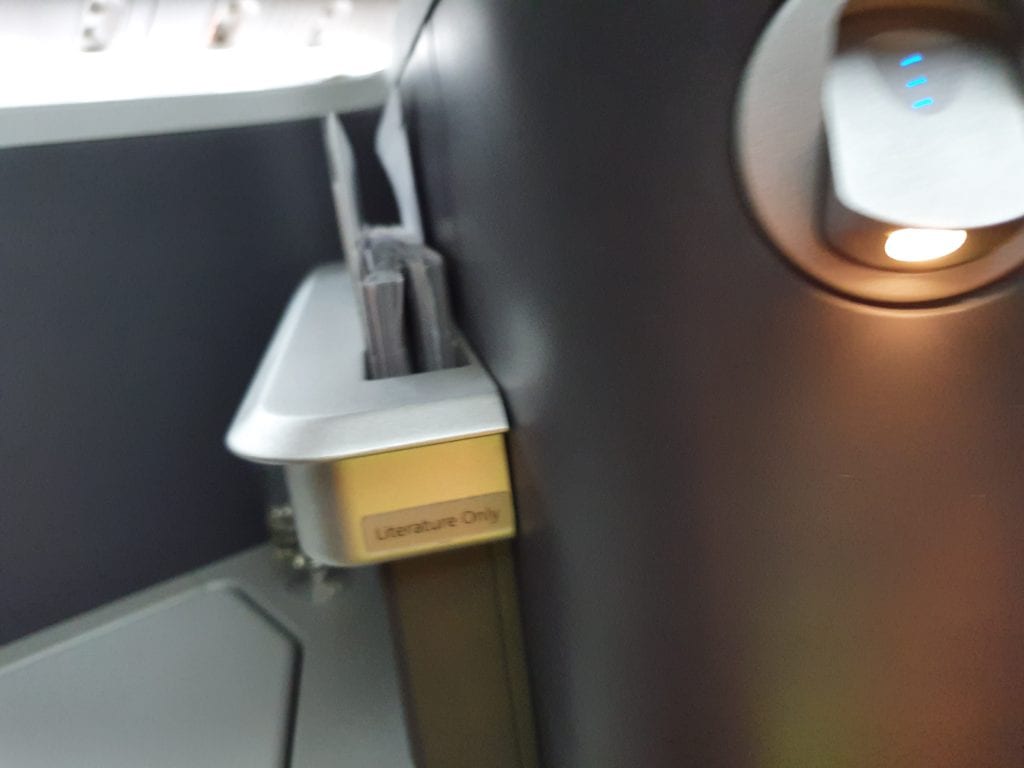 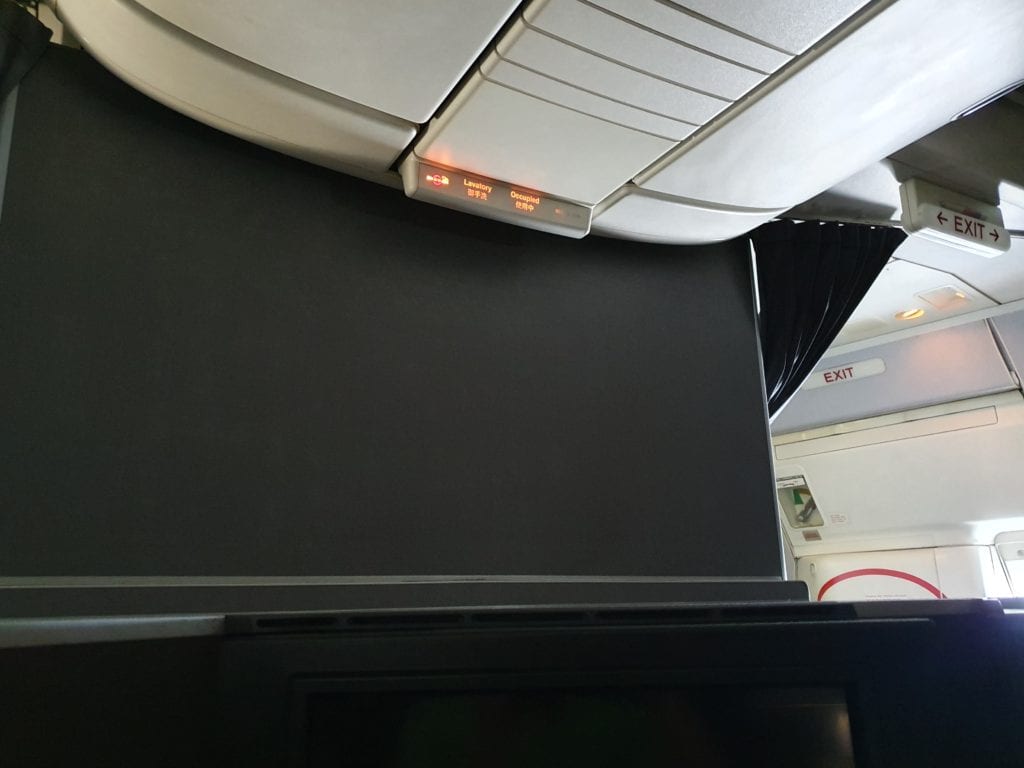 The amenity kit comes as a soft bag with the usual stuff in it. The bag itself is of a good quality and can be later used for something else if you wish to. 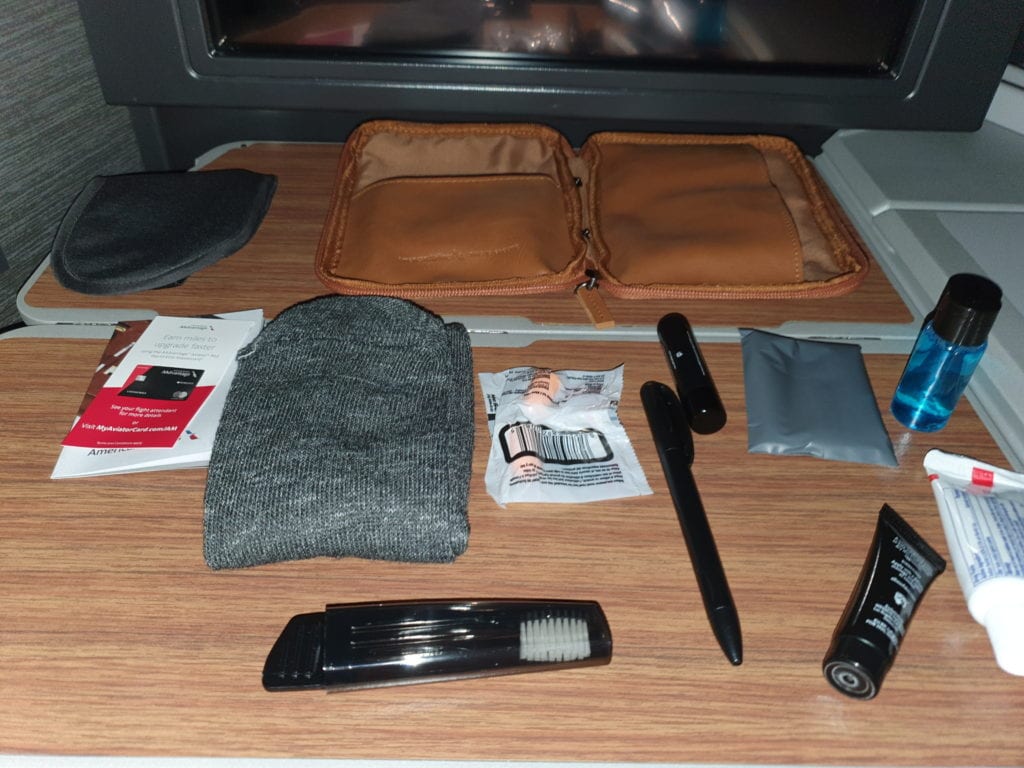 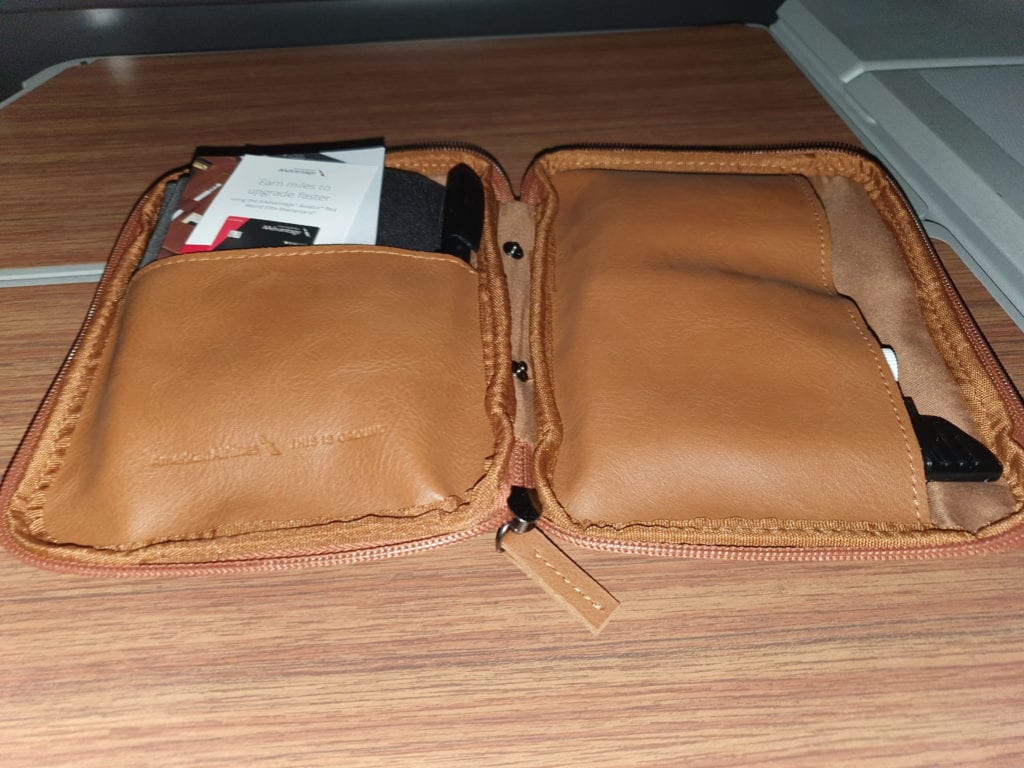 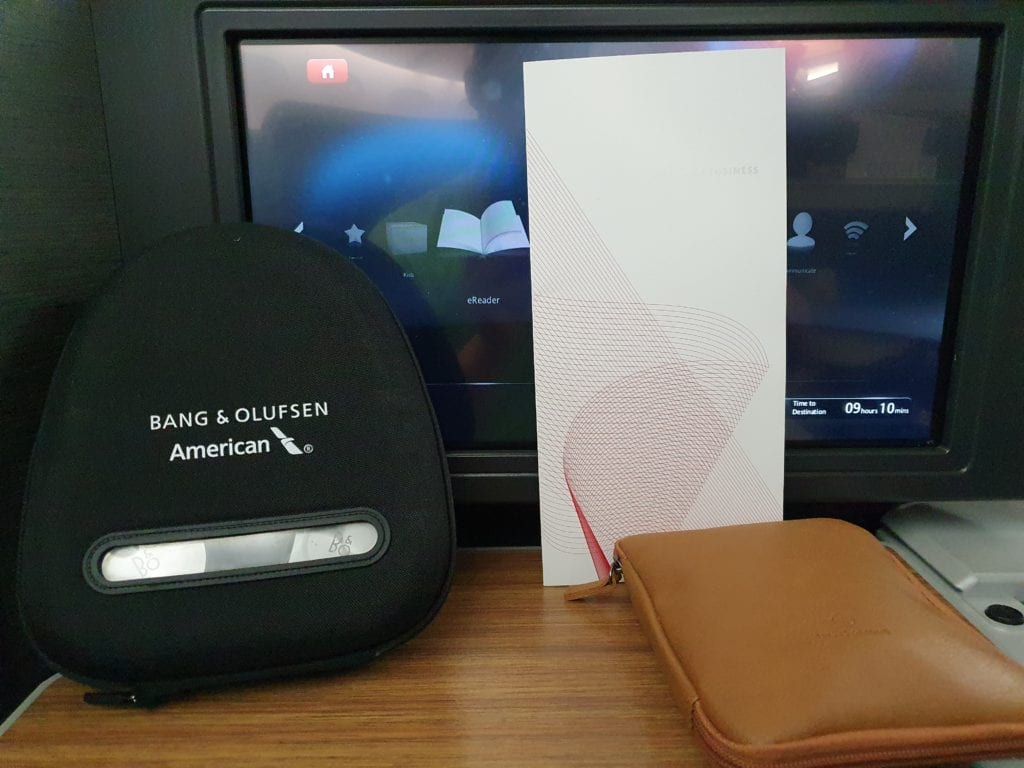 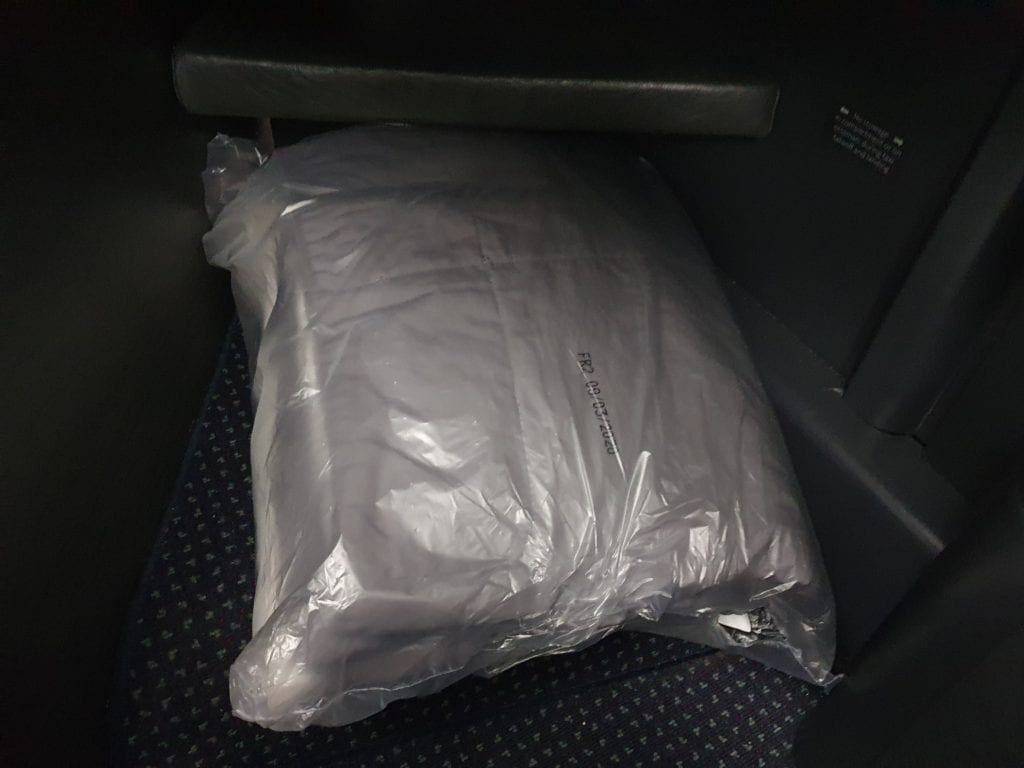 The front toilet is of the usual size, however the toilet between the two business class compartments is of a bigger size as you can see in the pictures below. 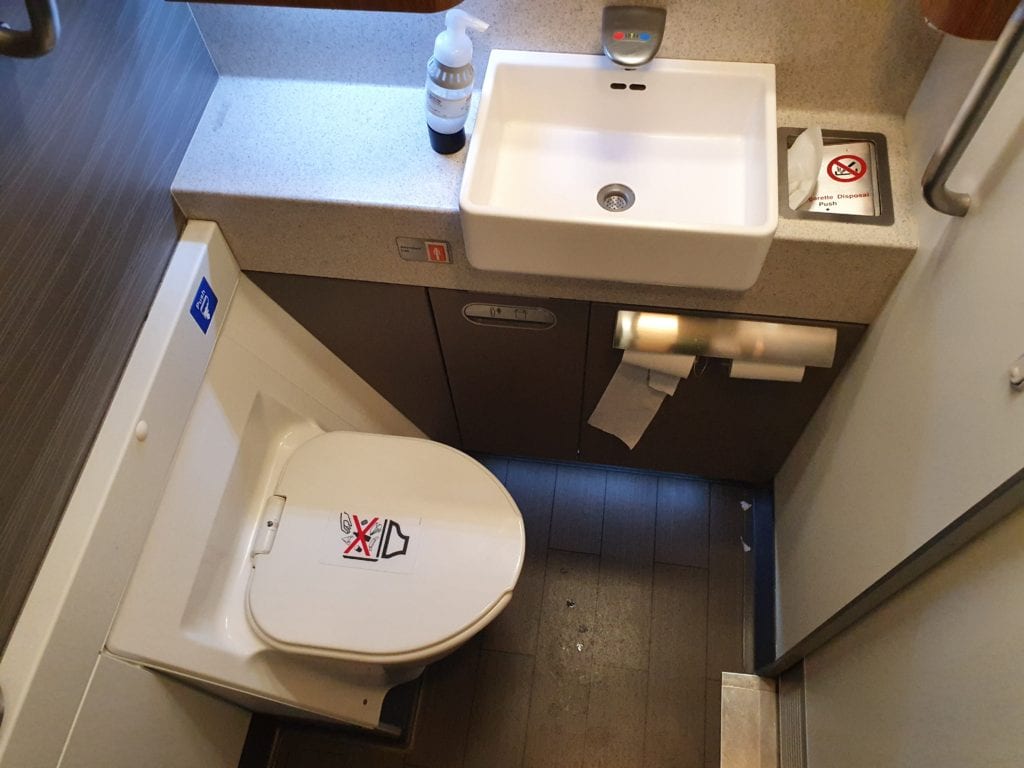 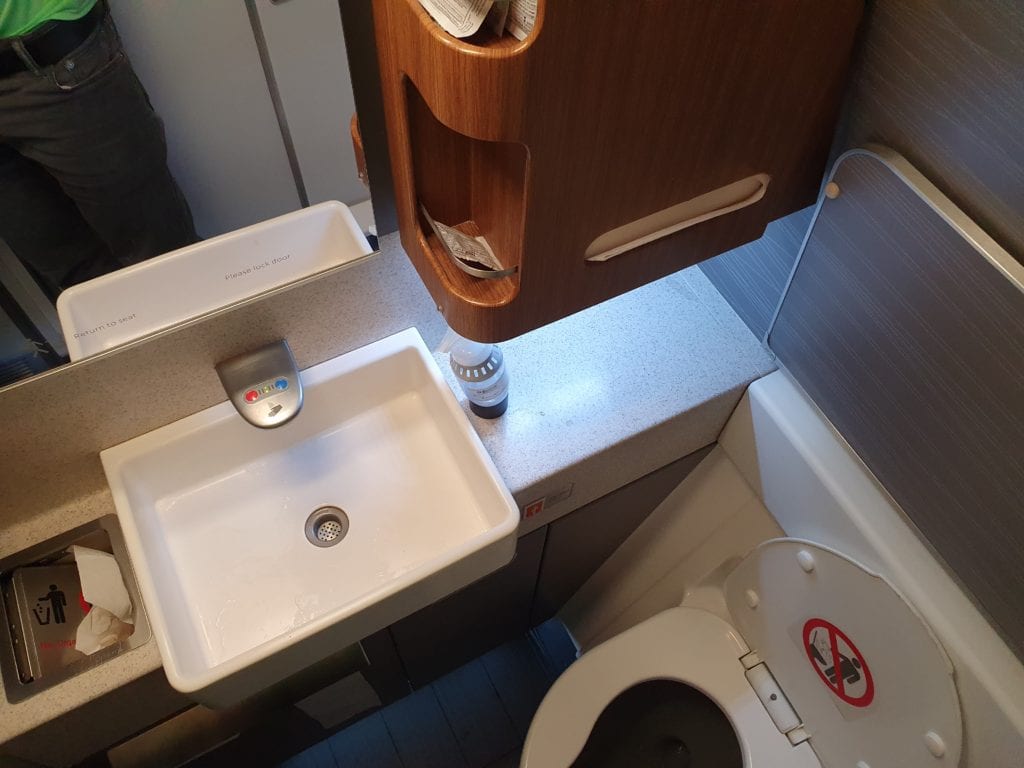 As pre-departure drink, you had the choice between water, champagne and orange juice.

Shortly after departure, some drinks were served and I opted in for an IPA. 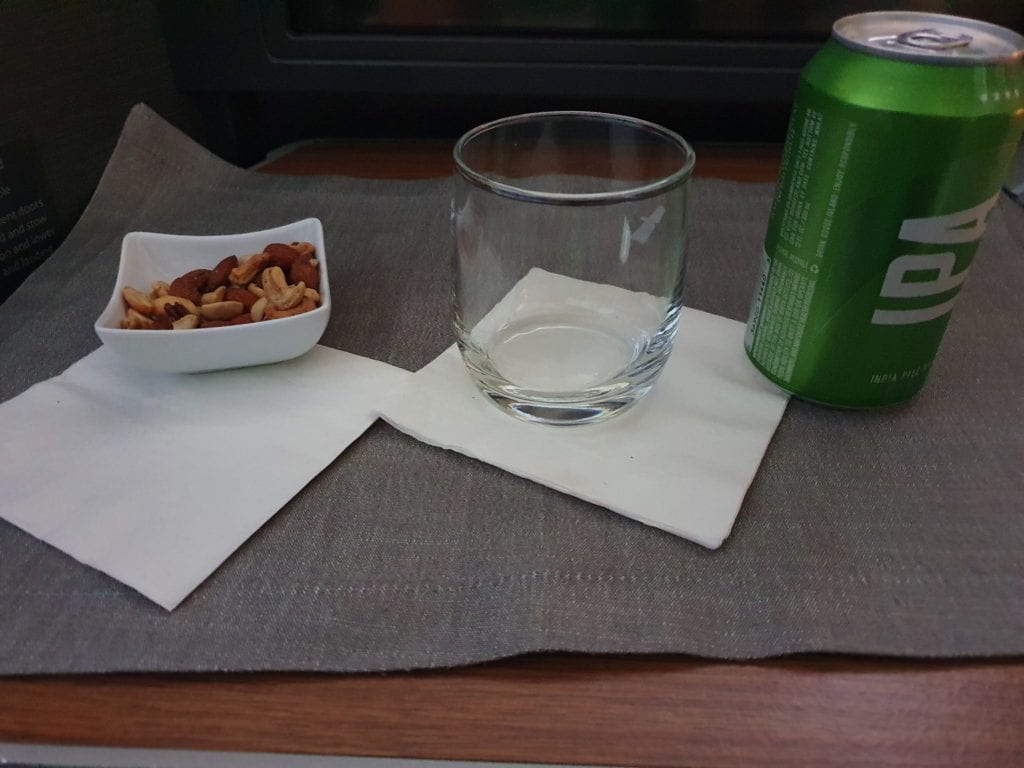 Lunch was really tasty. We had salmon as starter, followed by some Indian curry. The best part might have been the freshly prepared ice cream with customized toppings. 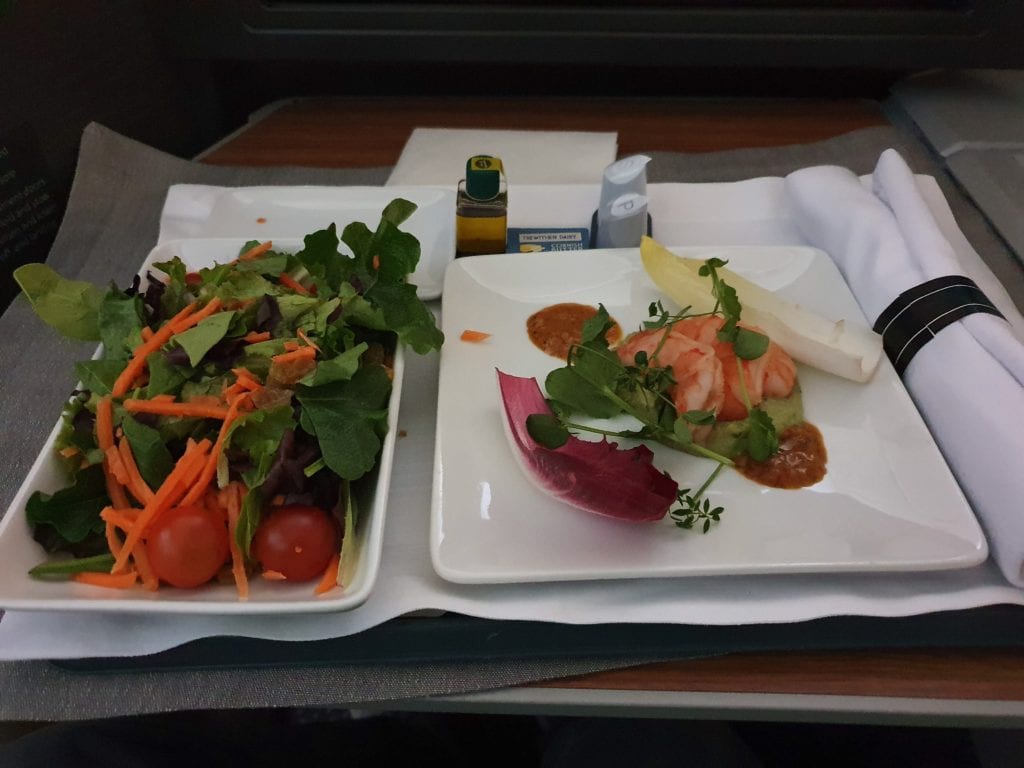 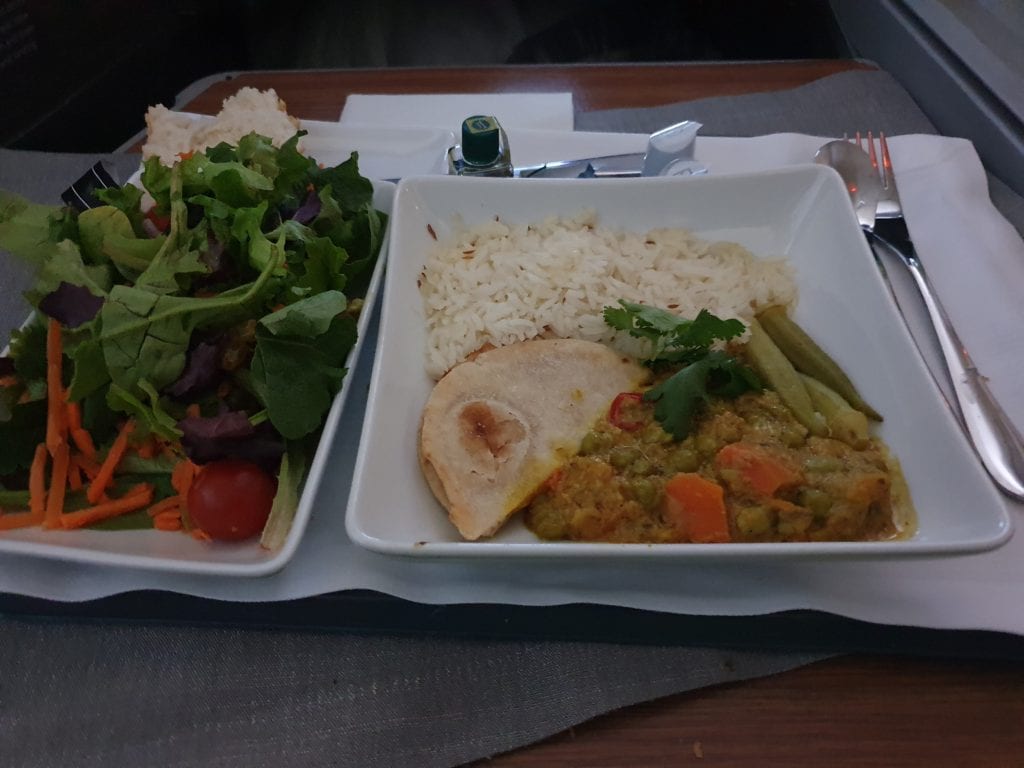 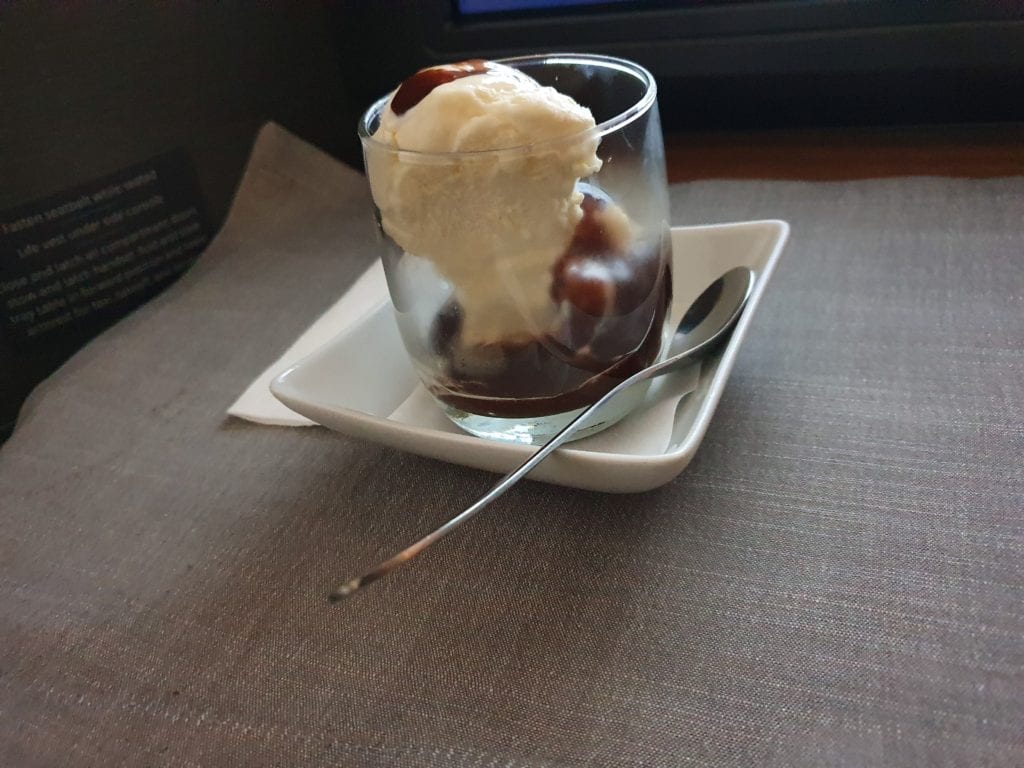 There was no small bar available with drinks or snack in between the meals. Staff only came around once with a basket of small, ridiculous bad sandwiches and never proactively asked for something to drink. 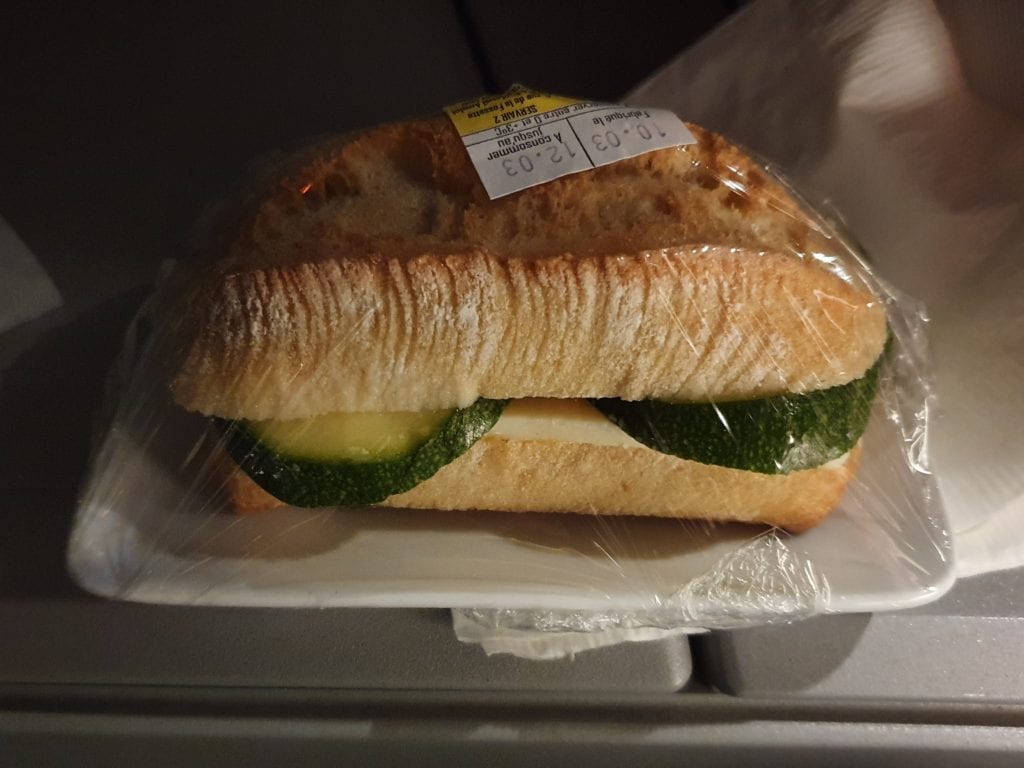 Not the best snacks available between the meals

The prearrival dinner was okay. Hearty cakes, chips, pudding and fruits. So nothing special here. 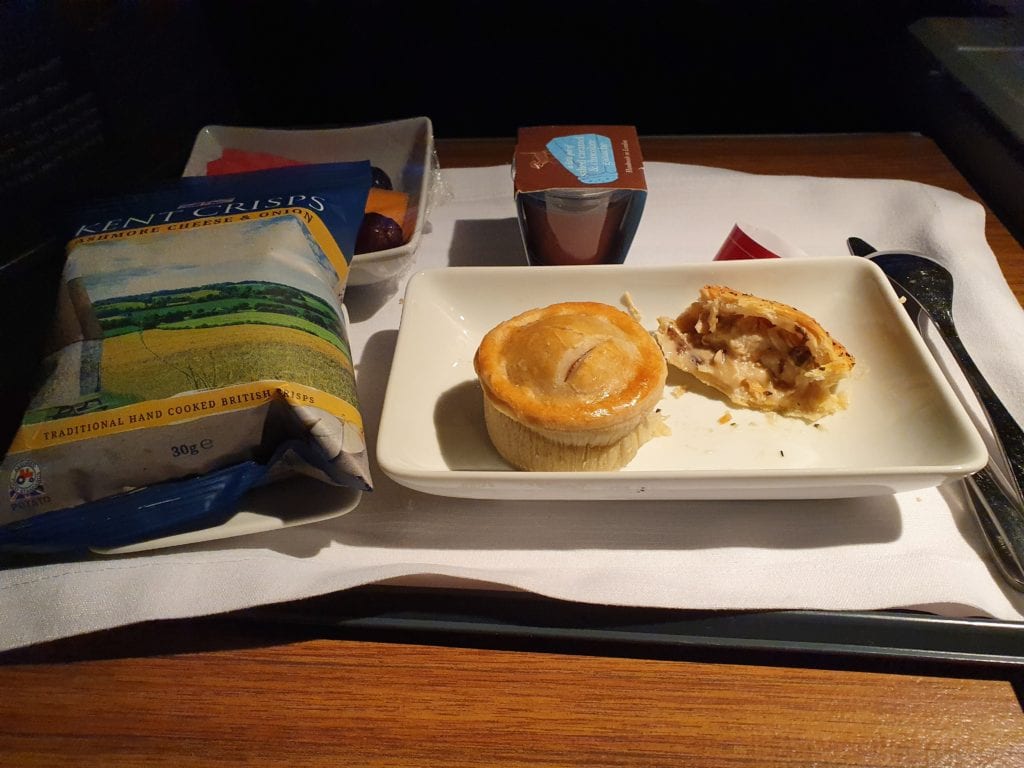 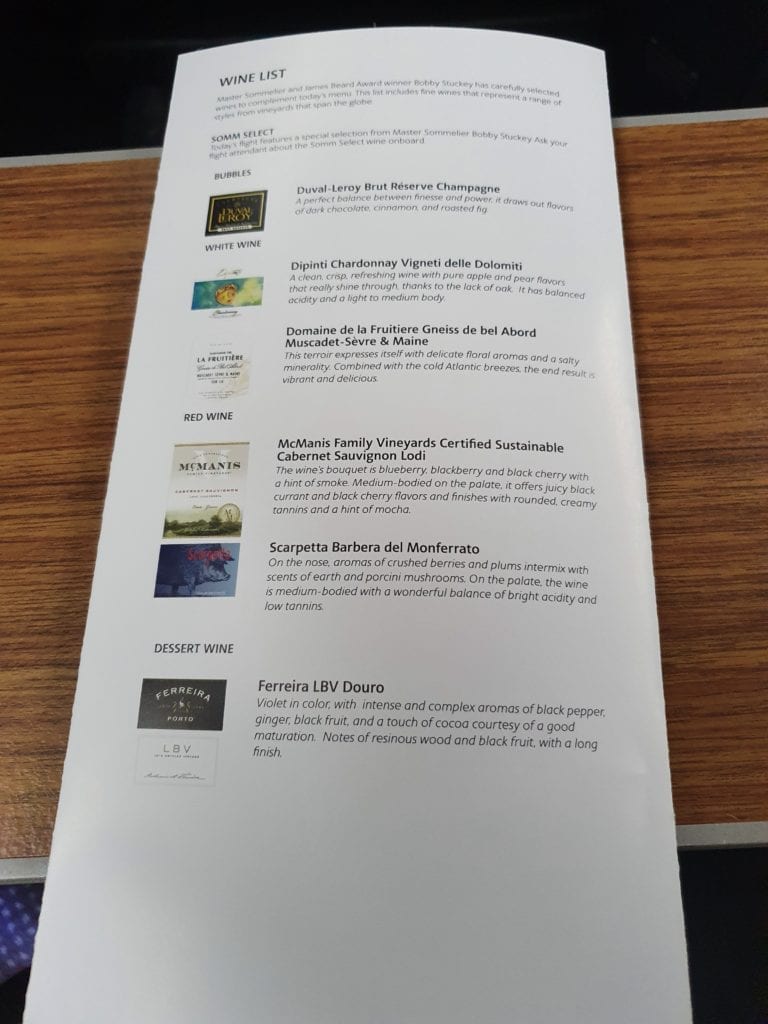 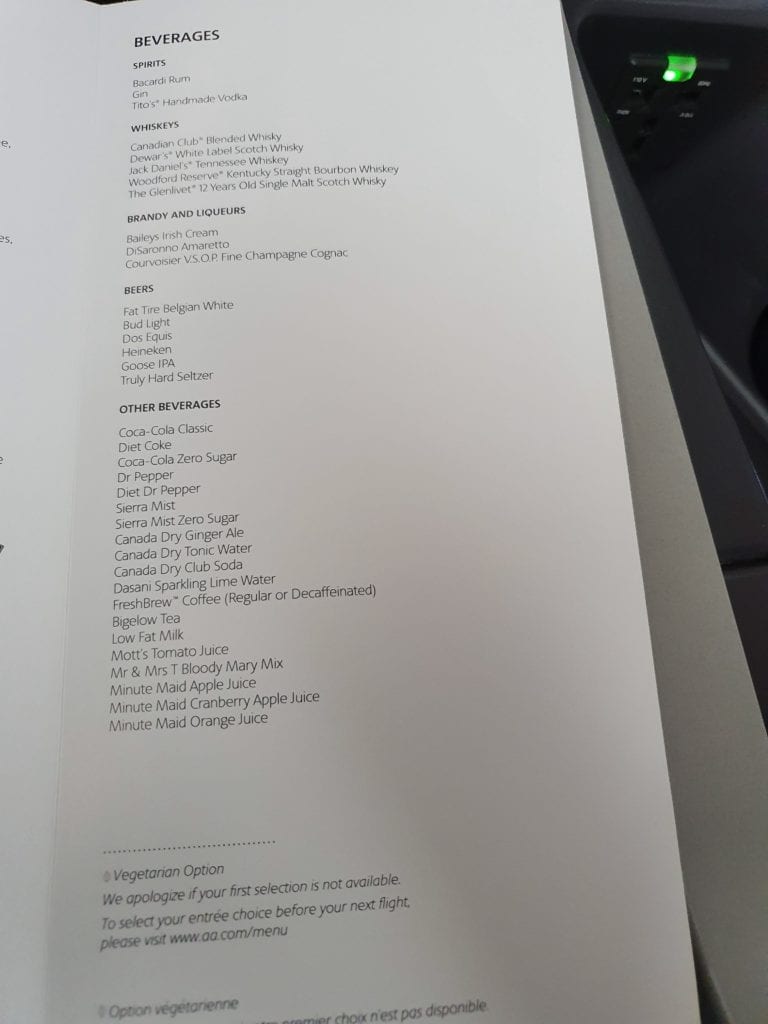 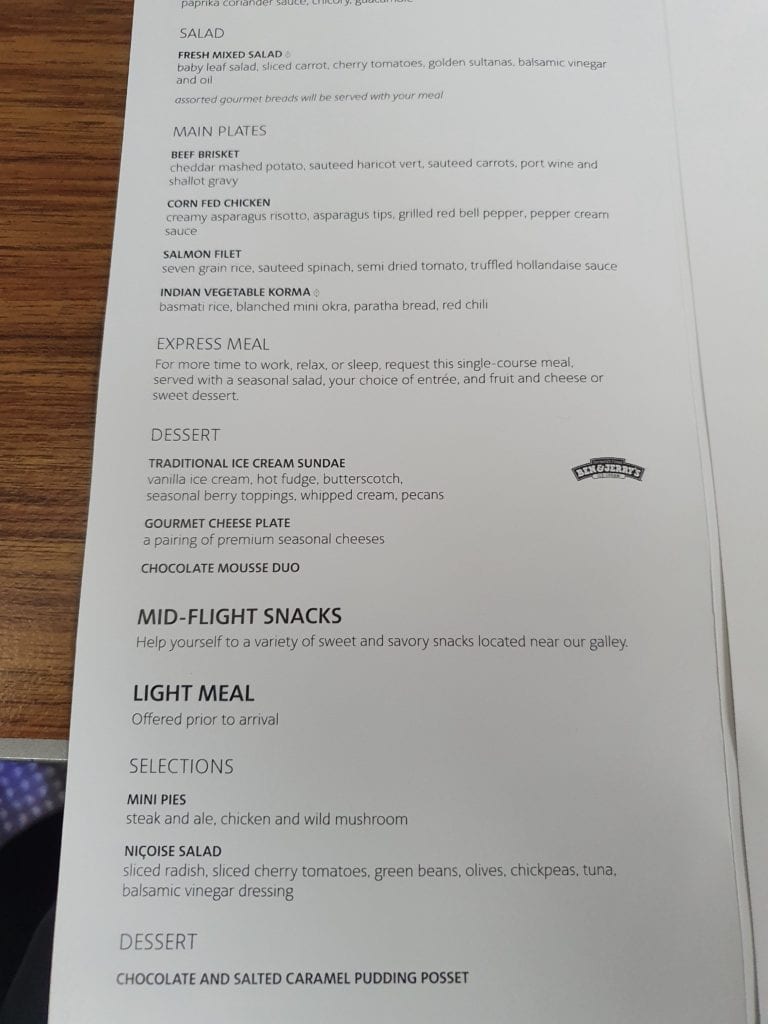 You read at many places that service is not ideal on American Airlines flights, and in general on American flight companies. To make it short, this is absolutely correct.

From all the flight crew we came in contact with, only one was somehow polite. For all the rest it seems that words like: “Hello, please, you are welcome, goodbye” simply do not exist.

Partially staff even was rude and literally unfriendly. They did not serve drinks in between the 6-hour meal break. You had to see a member of the staff, and asking for anything, the first reaction usually was an eye roll, totally unacceptable.

When we asked for hot water for our kid, the answer was :”Really, now?”. I mean that says it all.

I can say that this was the worst experience in terms of service I ever encountered on any airline and any class in my entire life. Especially the unfriendliness was overwhelming. Furthermore, we also had an economy positioning flight the same day, and the service was as ridiculous there as it was here. 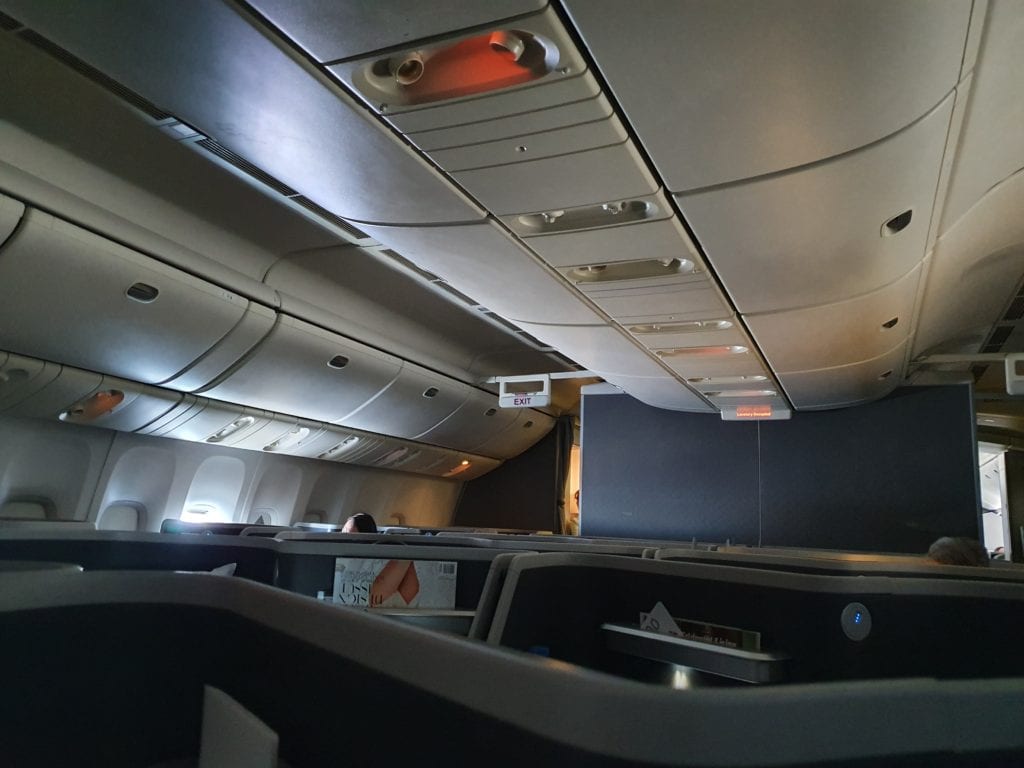 Upon arrival, business class passengers could leave the aircraft first.

What a shame that the service was that bad in this Flight Review American Airlines Business class.

With the hard product, especially the seat, I was really satisfied. That also counts for the lunch which was very tasty.

However, it is probably impossible to offer a service worse than what we encountered here in a premium cabin. I will probably avoid American Airlines as much as possible in the future due to the unacceptable service.