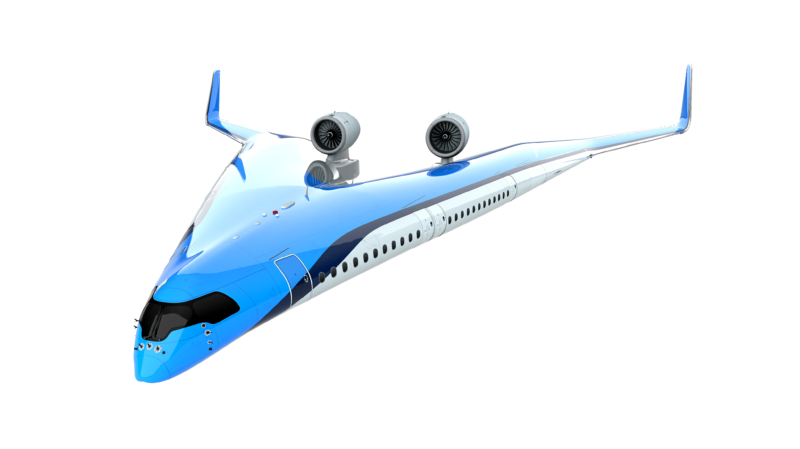 KLM and TU Telft are studying together a new flight concept for a V shaped aircraft called Flying-V.

The Flying-V is a long-haul aircraft where the passenger cabin, the cargo hold and the fuel are all located in the wing

In which category would such an aircraft compete?

The aircraft would compete in the same category as, for example, the A350. While it would be shorter than the A350, the wingspan would be roughly the same.

314 passengers would fit in the standard configuration and 160m3 volume of cargo, which is similar to the A350 as well. Overall the Flying-V would be smaller giving it less aerodynamic resistance.

The technology behind the Flying-V

Preliminary calculations have shown that the aircraft would have significantly less drag than a modern wide-body aircraft and structural weight is significantly lower. Based on those studies it is estimated that the Flying-V would consume 20% less fuel than an Airbus A350 for the same flight.

The engines would be positioned above and behind the wing. Engines located behind the passenger cabin will reduce the cabin noise.

The wing area is roughly two times larger than the wing area of an Airbus A350, which allows the aircraft to meet the approach-speed requirement of 140kts.

It is planned to fly a scaled model of the aircraft with a length approximately of 3 meters later this year.

What about the passenger cabin? 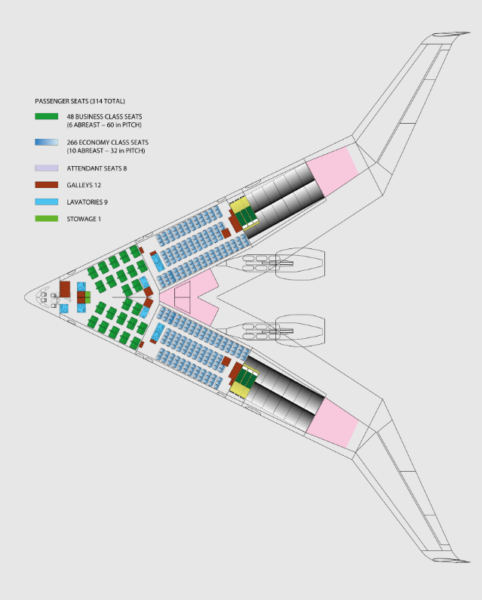 Business class would be in front of the aircraft where the V shape is not yet dividing the body into 2 parts and will come as pairs up to a 2-2-2-2-2-2 configuration, meaning up to 12 seats in one row.

Economy class would begin where the body is dividing, and seats would be configured in a  3-4-3 configuration within the 2 body parts.

Due to the fact that passengers are sitting far away from the center of gravity, it will be interesting to see how passengers react in rough weather or even only if the aircraft will proceed with a turn, as passengers would be lifted significantly more in the Flying-V than in traditional aircraft.

It is always interesting to see new concepts of aircraft to improve fuel efficiency and passenger comfort. KLM and TU Delft are already quite far in the development of the Flying-V, however there is still a very long way to go before there is a possibility to see such an aircraft in the sky.