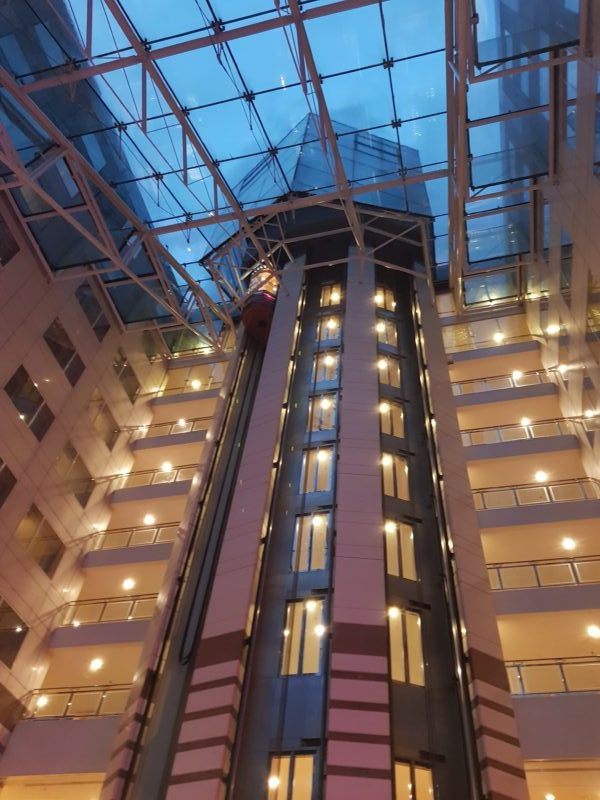 The Hotel is located adjacent to Roissypole Gare and the CDGVAL shuttle to the terminals.

Apparently we got upgraded from a normal King Room to a newly renovated one, without any information of this by the staff. As we had an issue with the ventilation, which could not be switched off in our room, we got another, corner room which was significantly larger but from the same category. The rooms, especially the second one, are very spacious and you see that they have been renovated recently. Plenty of room is available to unfold your things. The King bed is very comfortable. However the interior of the room itself is rather minimalistic without any decor touches. The bathrooms are literally the same in both rooms, marble and spacious as well, with a separate bathtub and a walk in shower which is nice of course. 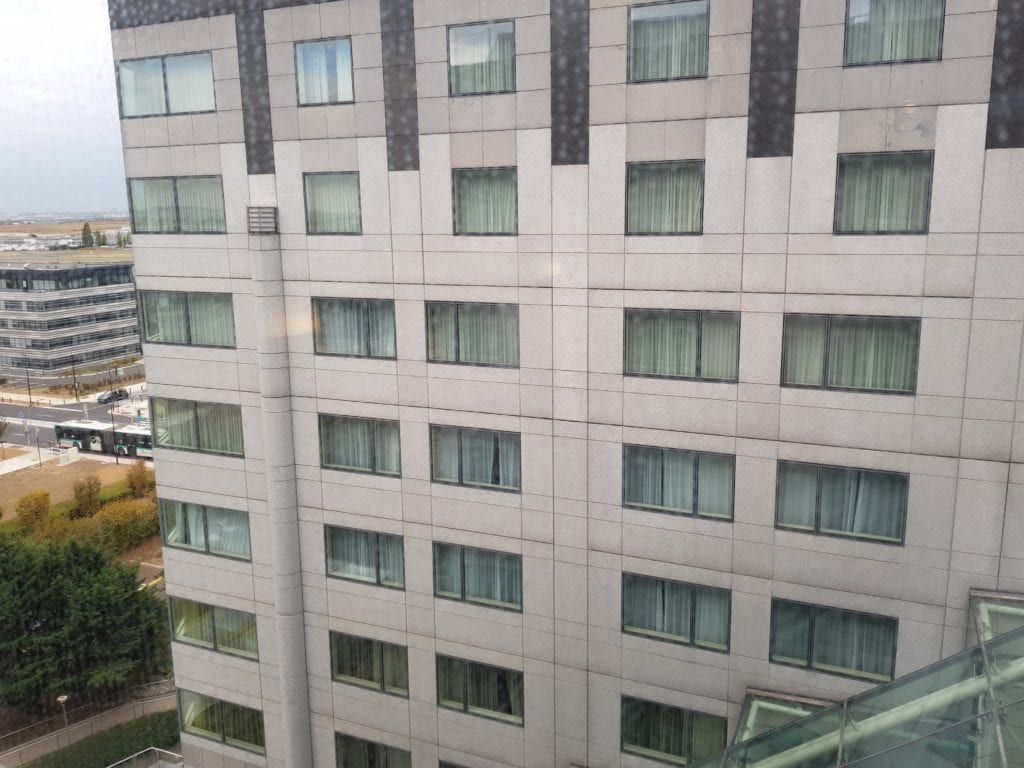 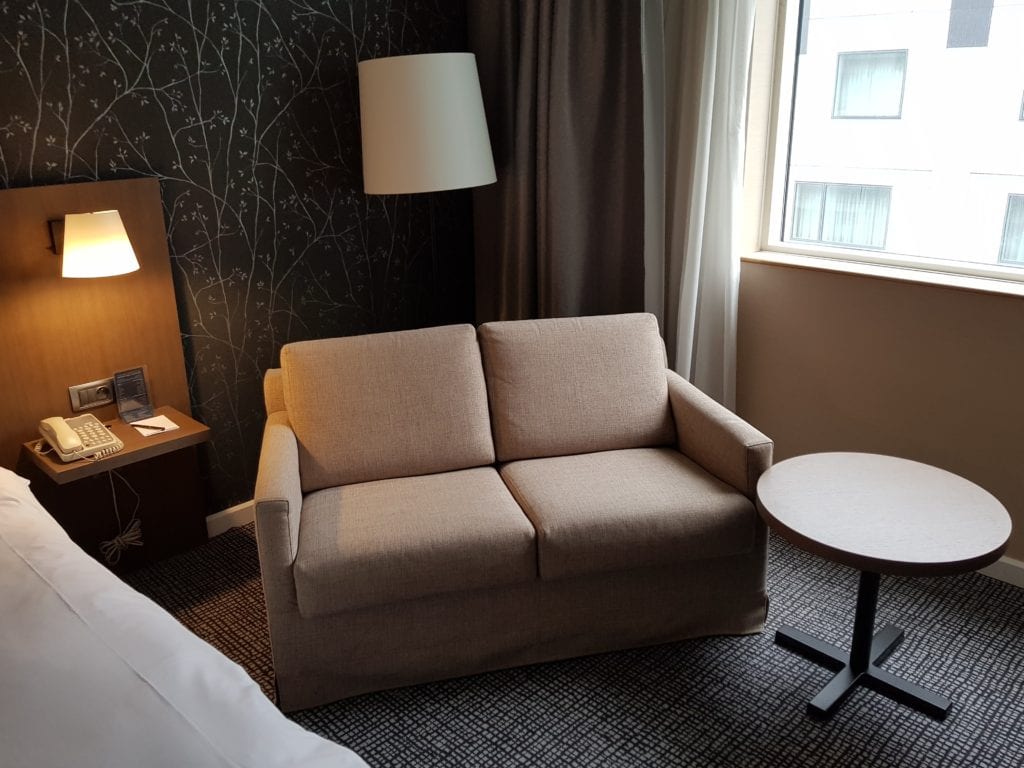 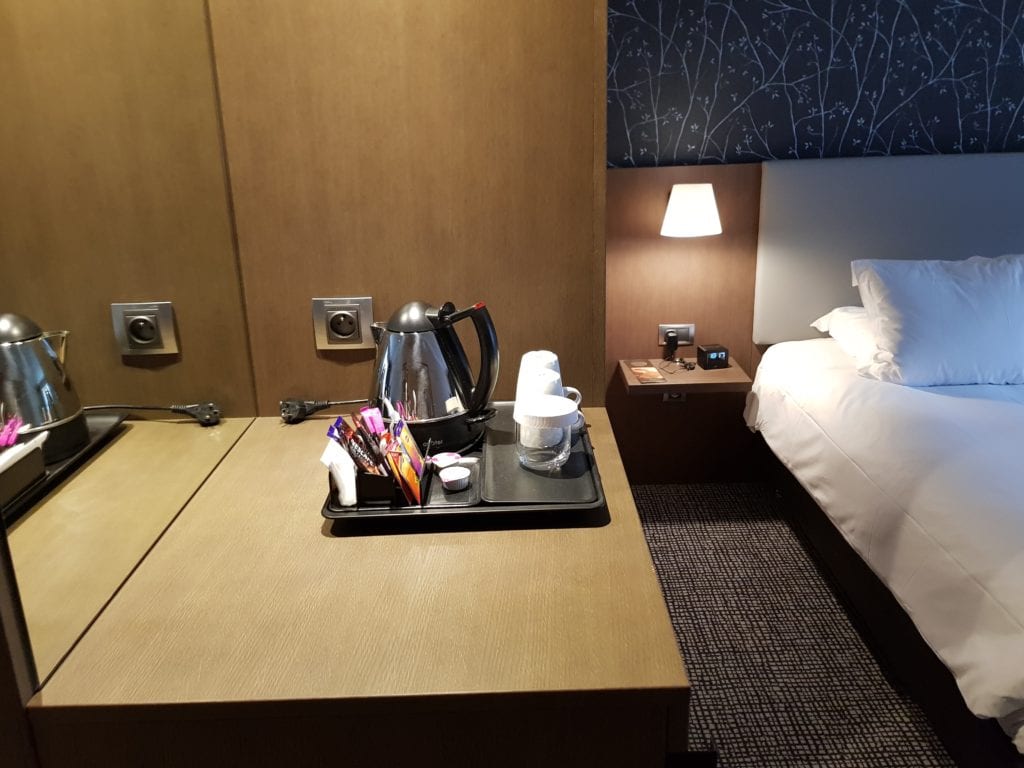 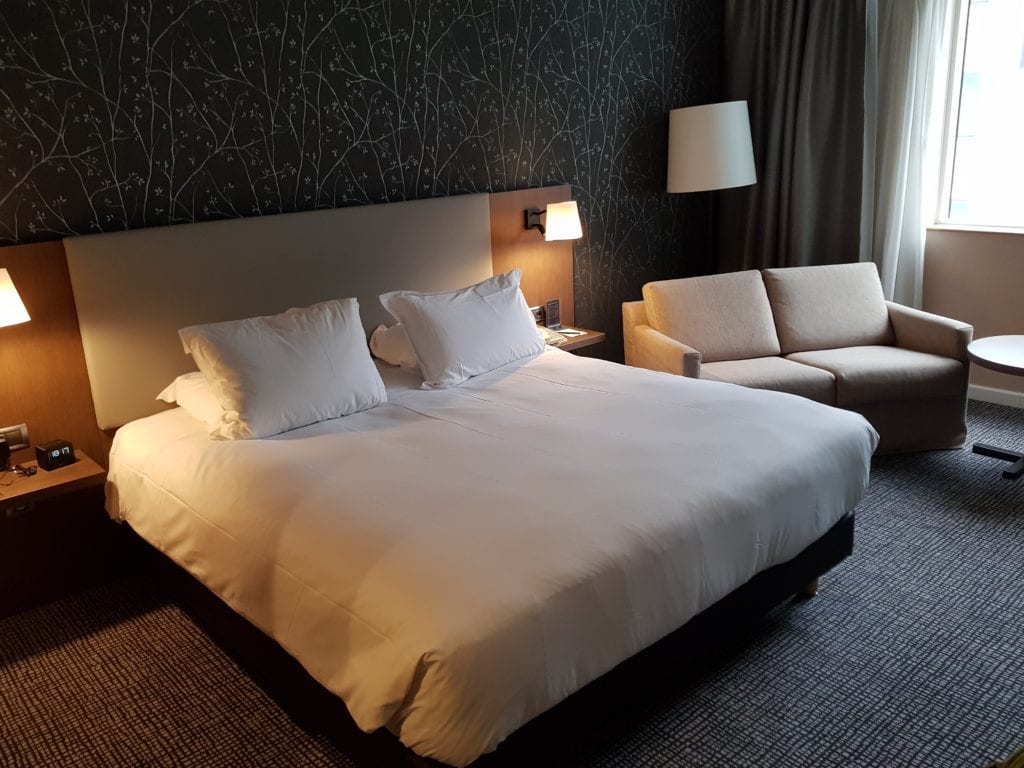 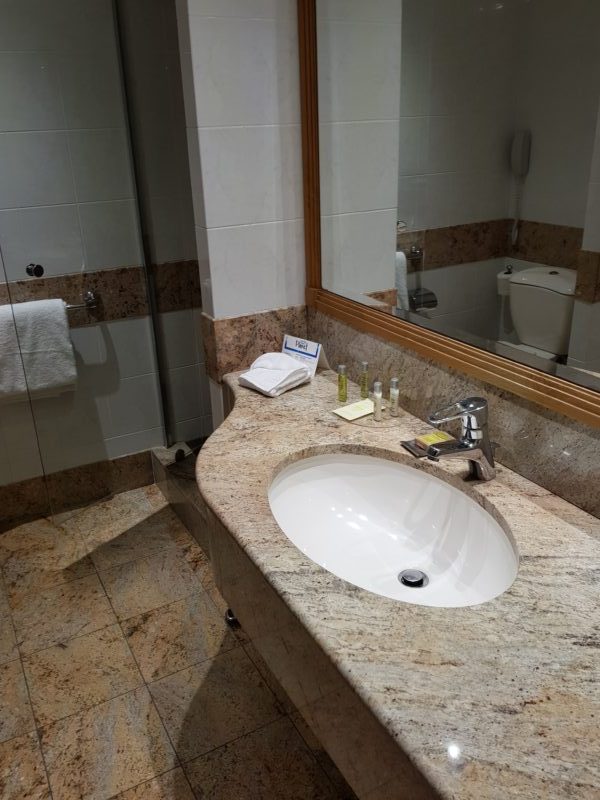 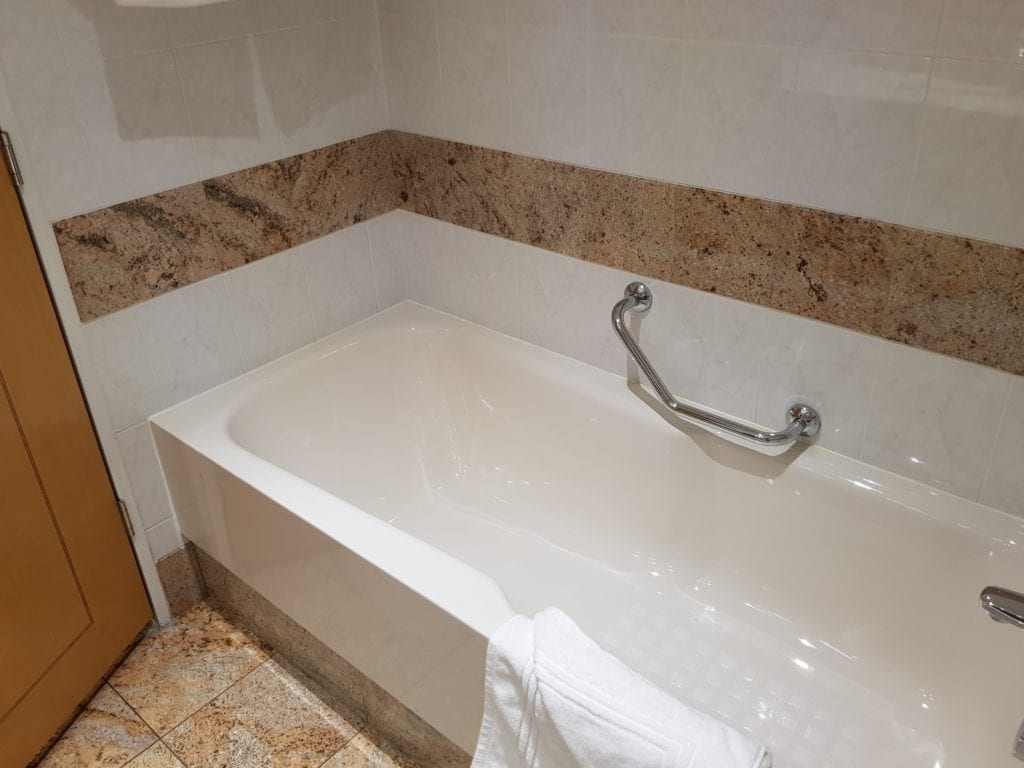 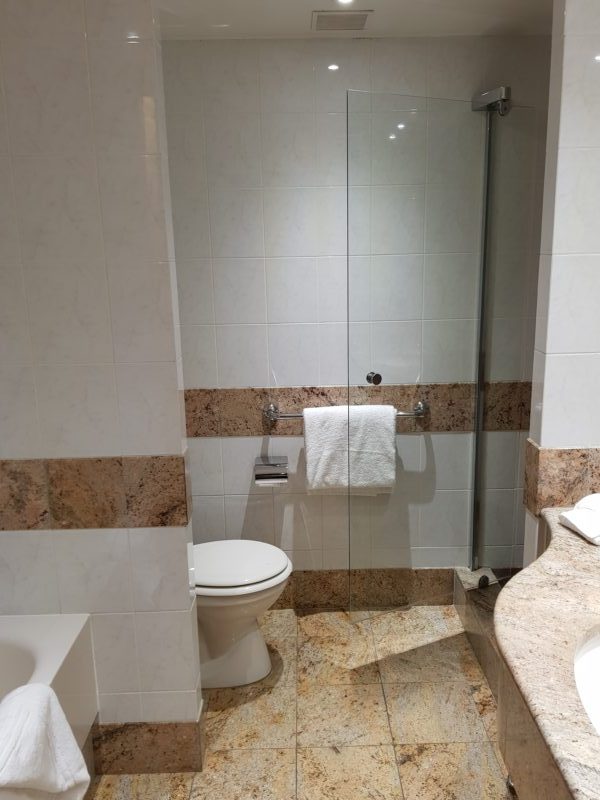 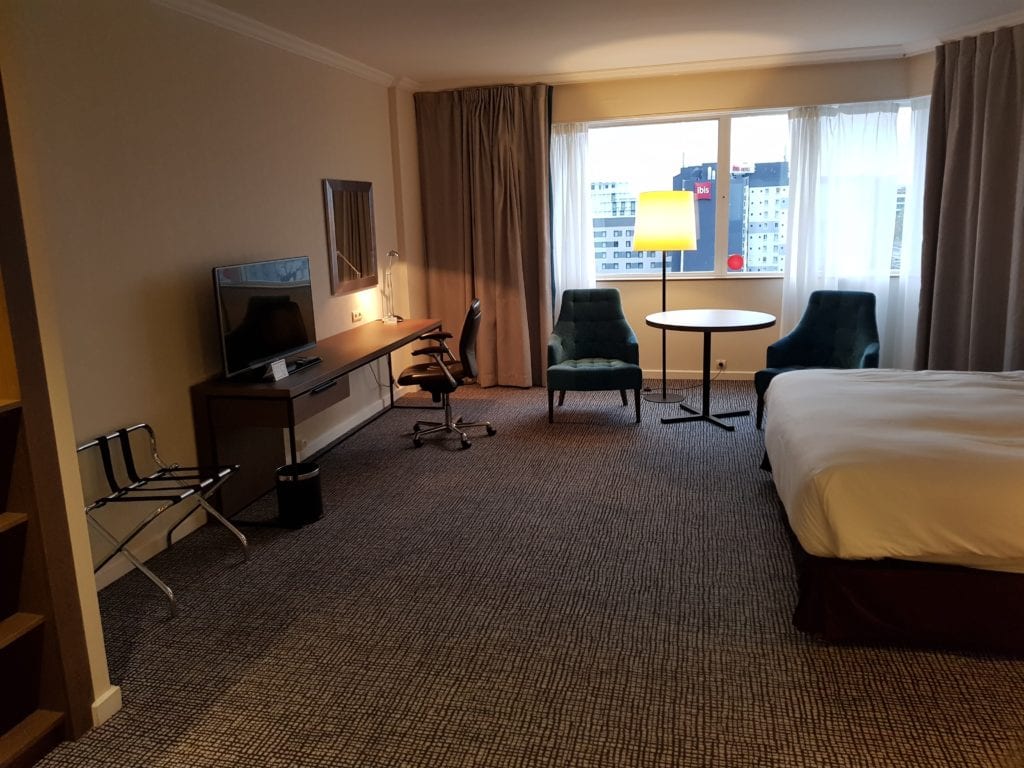 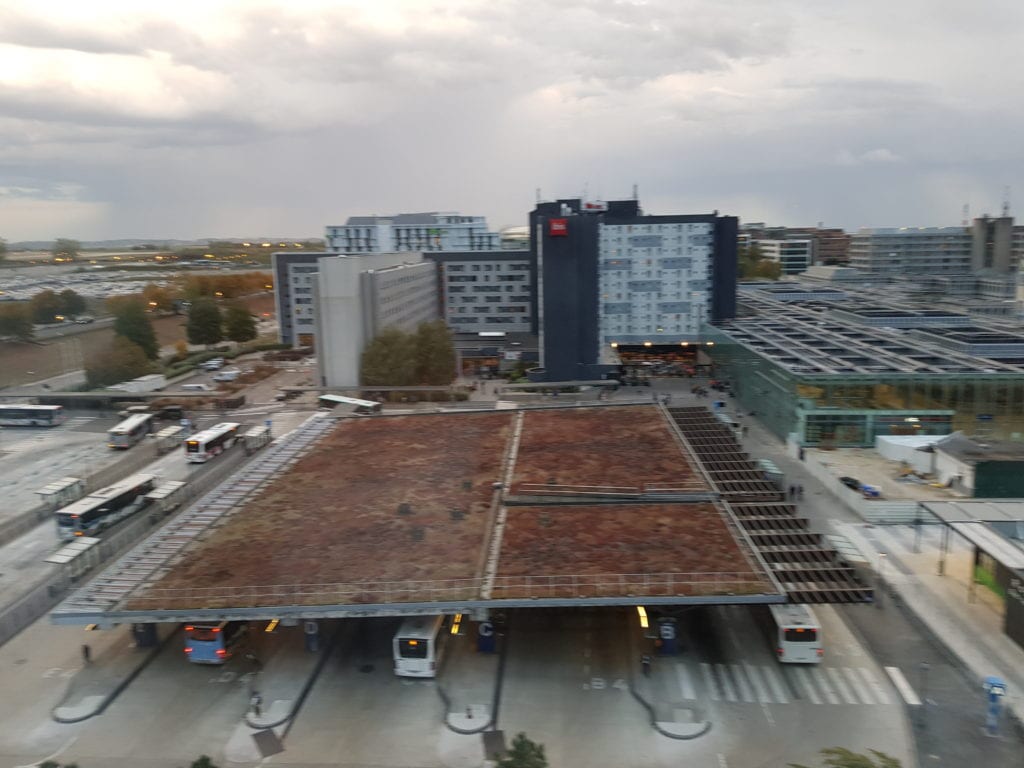 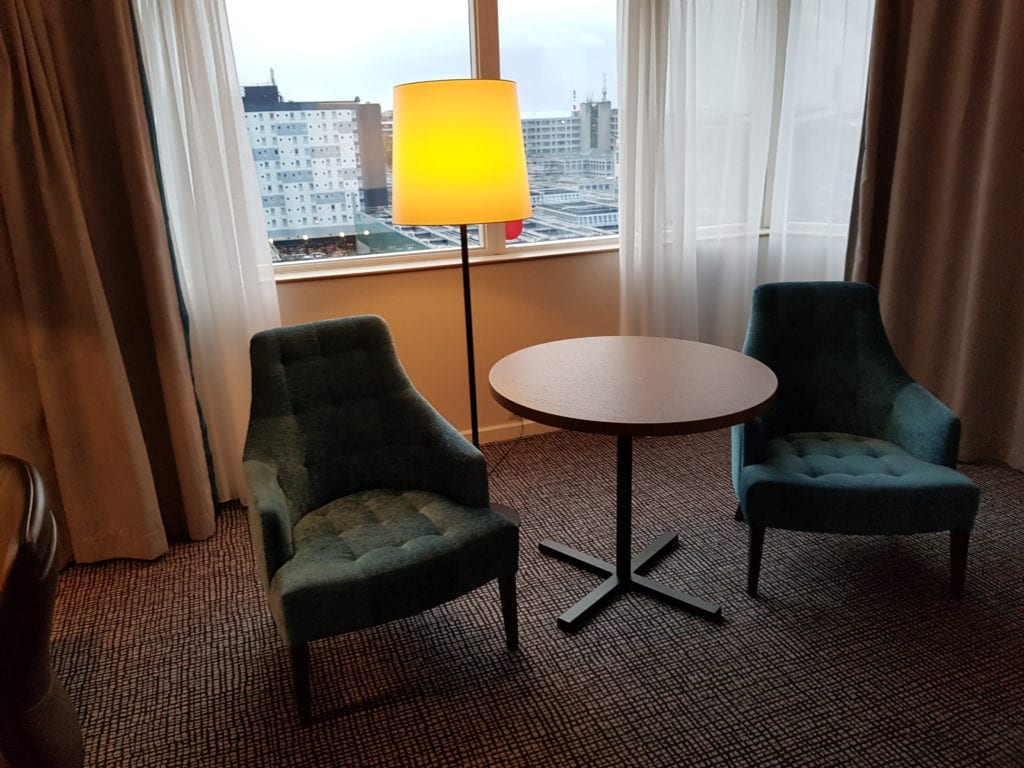 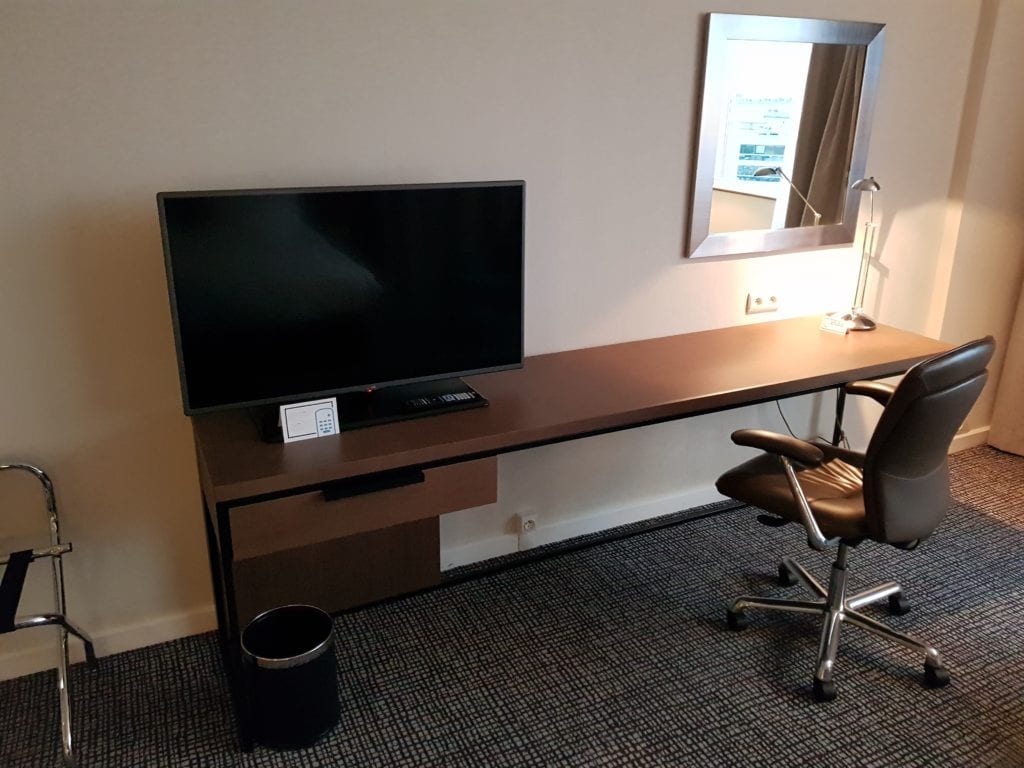 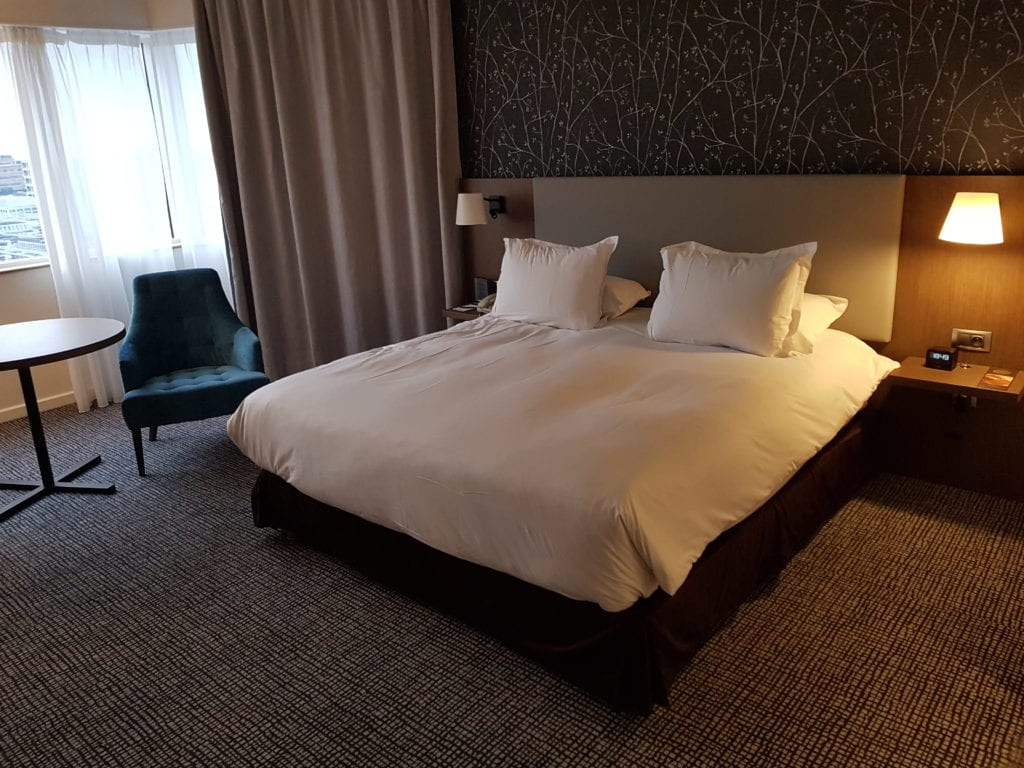 In terms of Food & Drinks, we had very mixed feelings. We had pre dinner cocktails and dinner at their bar and breakfast in the restaurant.

First of all dinner itself was very tasty. We had Fish and Chips and an Onion soup wich were both delicious. However the cocktails served at the bar were a joke in terms of presentation, and the staff was very inattentive which we will discuss further below.

Breakfast is served until 10a.m, and due to some issues at the reception we arrived around 9.40. However already a couples of minutes later they were clearing the buffet. Selection was way below average, with maybe 4 hot choices, some limited variety of spreads, fruits, salads and bread. To give you an example of the quality, simply look at the picture below, the potatoes were literally drowned in fat. Furthermore, one single bottle of ketchup was left in terms of sauces, and you had to get the coffee yourself from a machine. 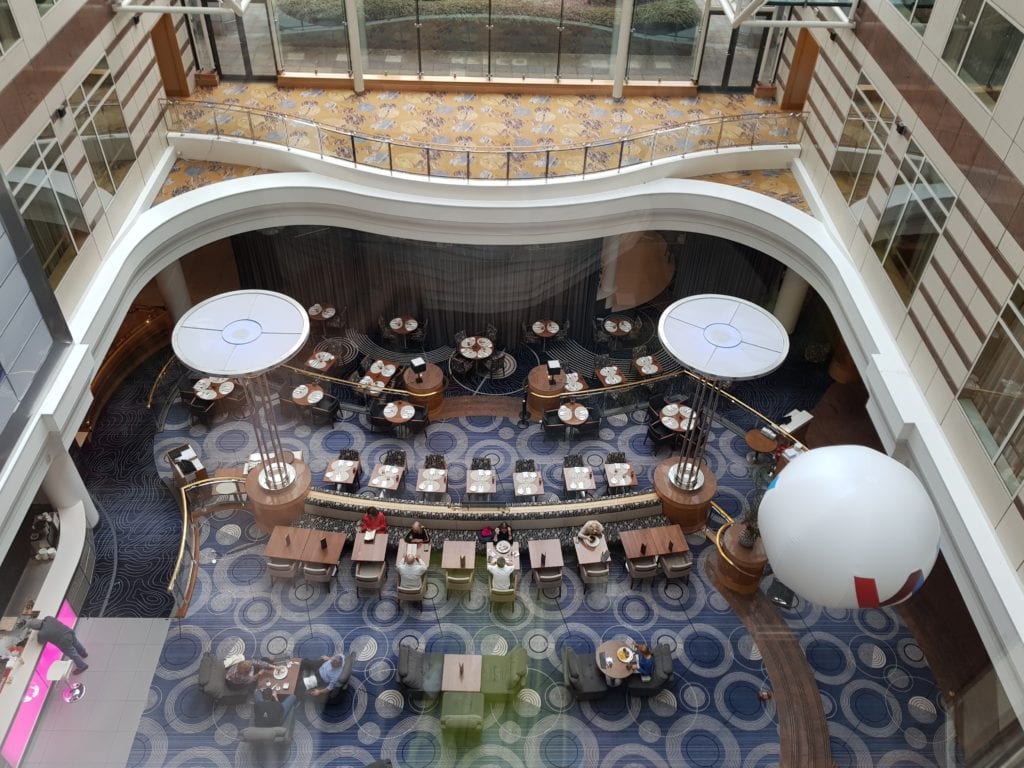 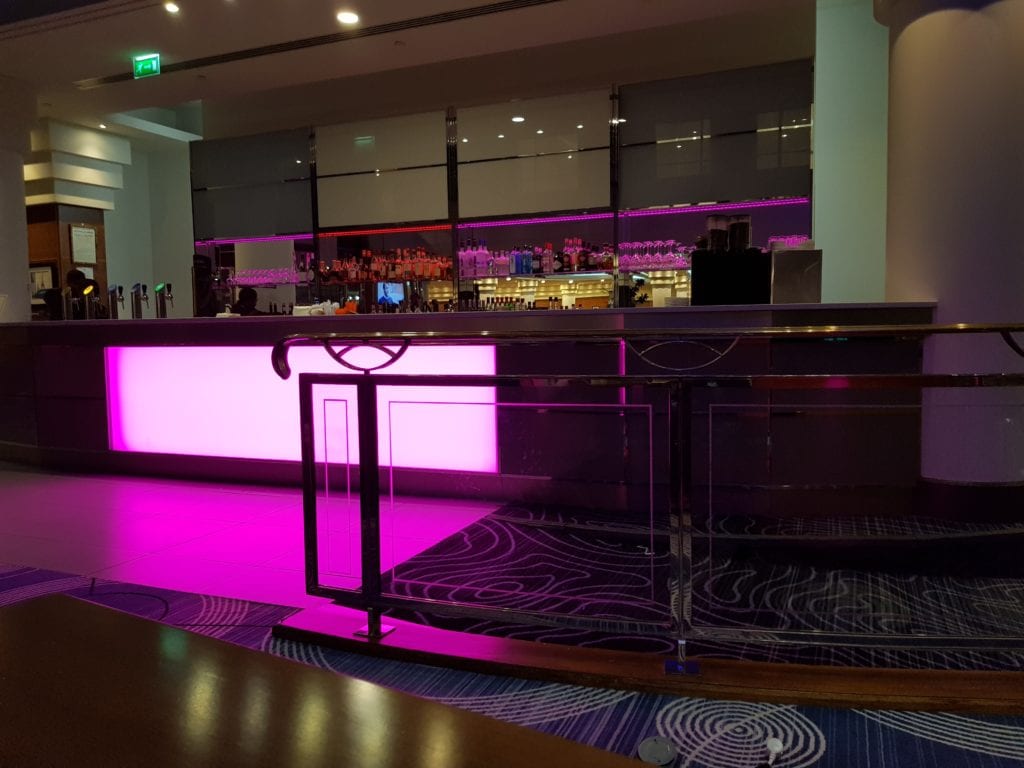 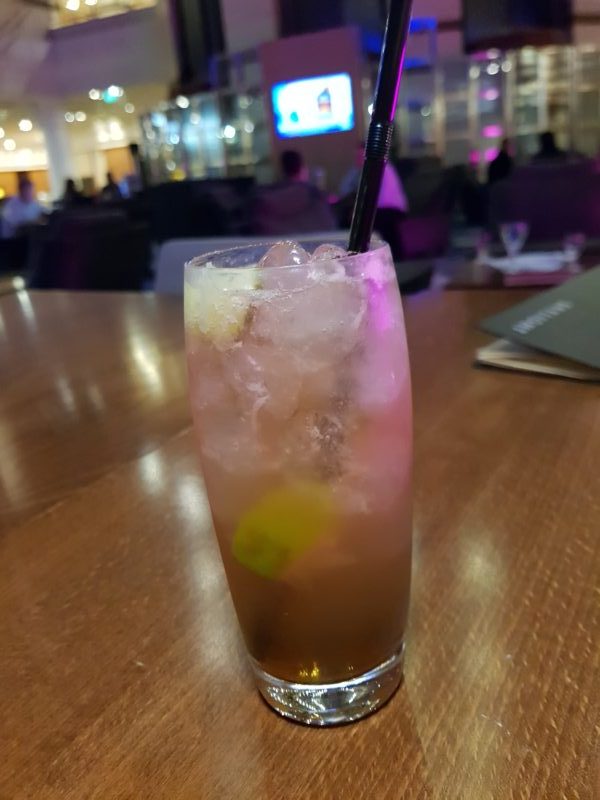 Cocktail at the bar 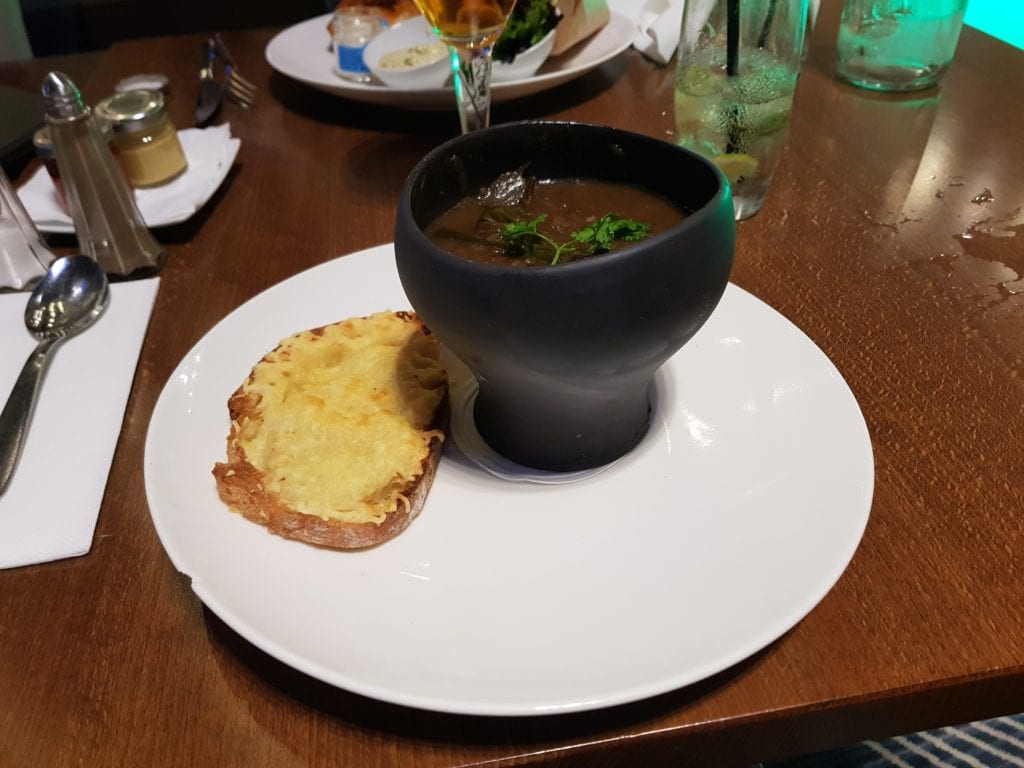 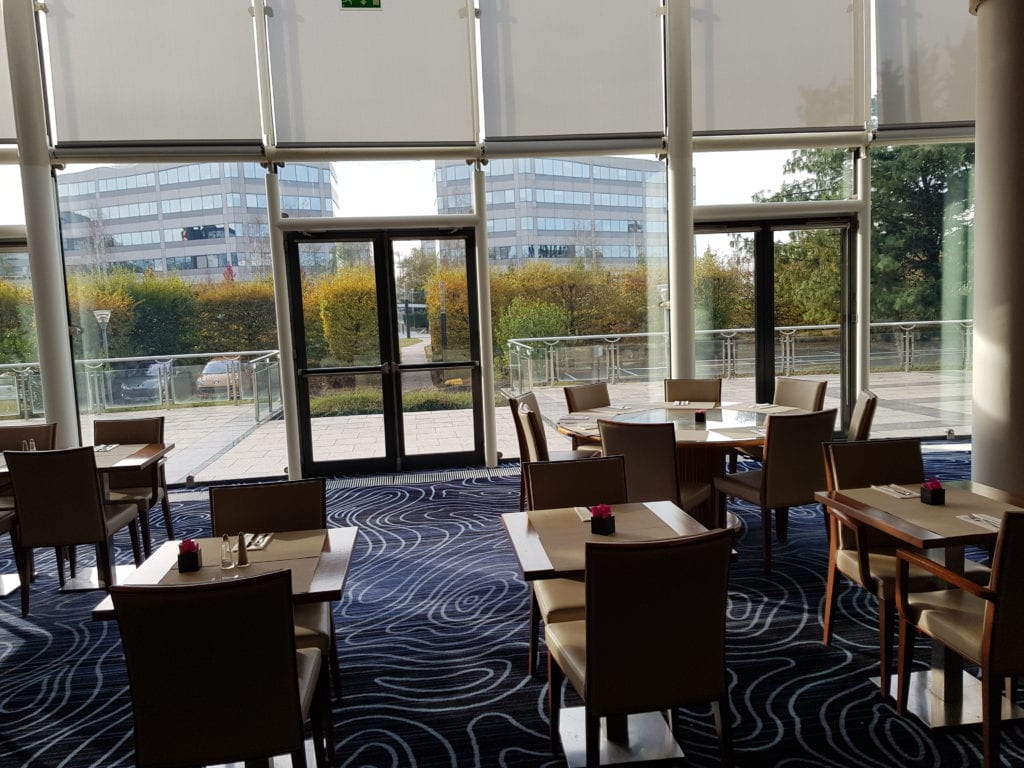 Back area of the restaurant 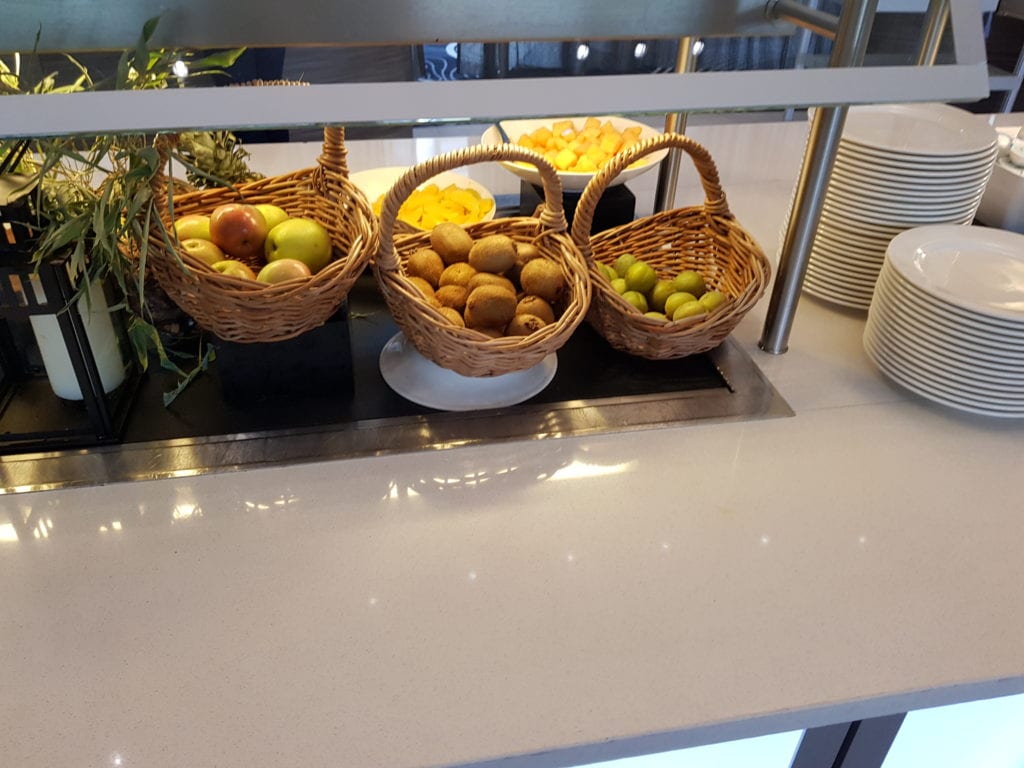 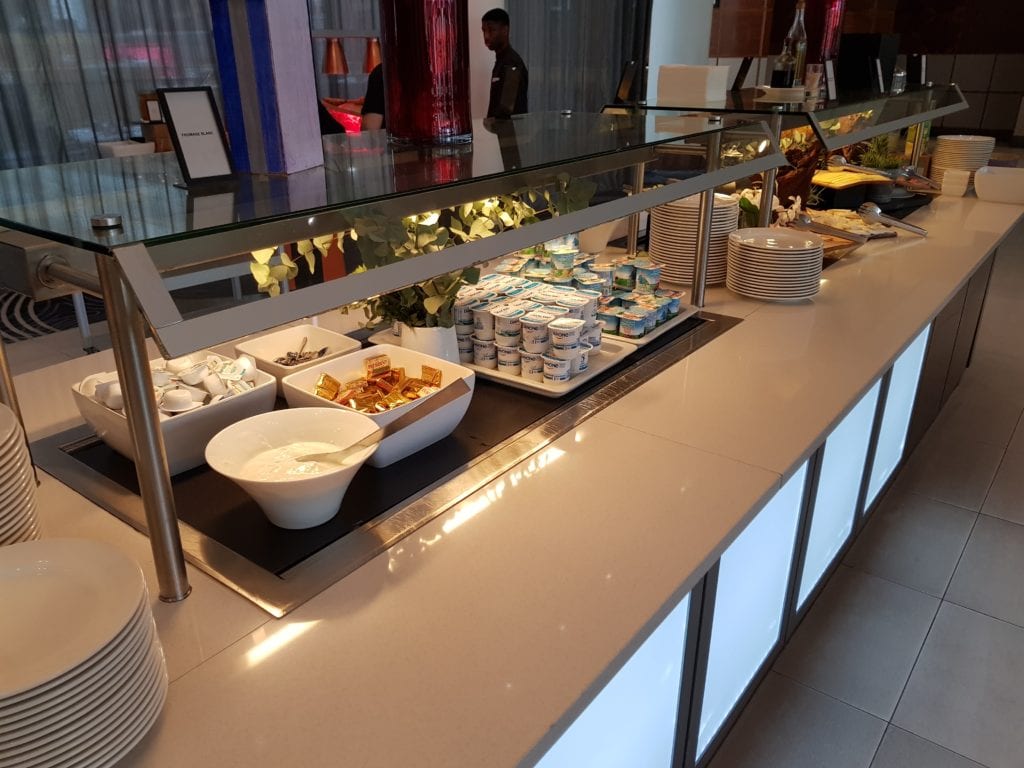 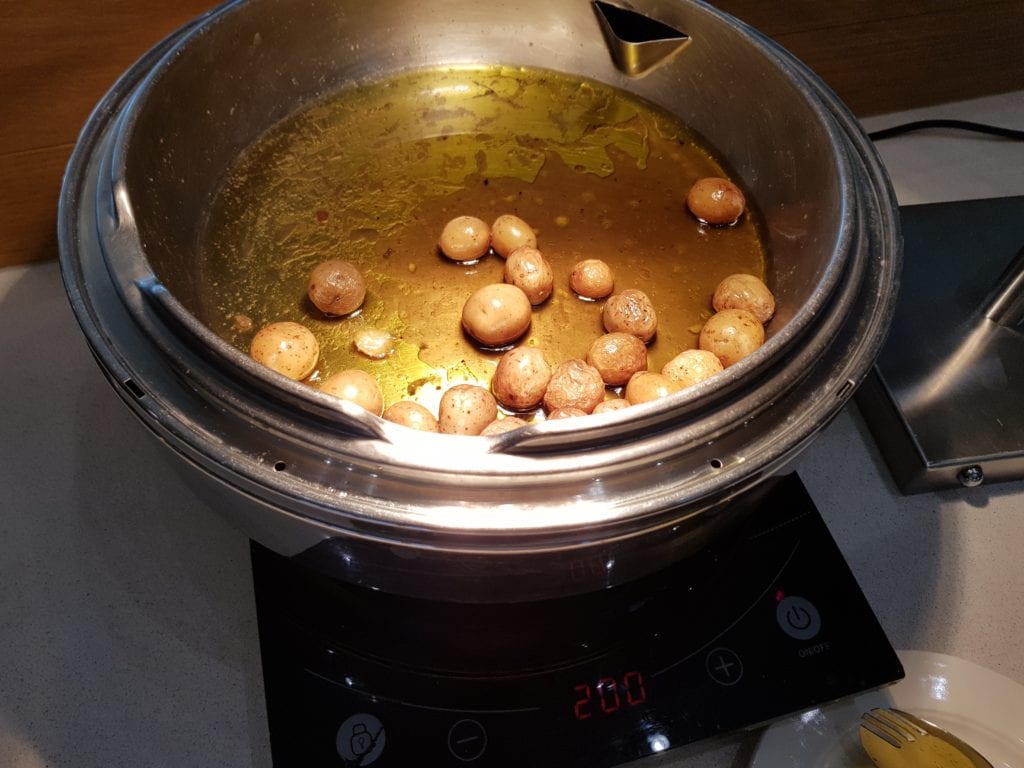 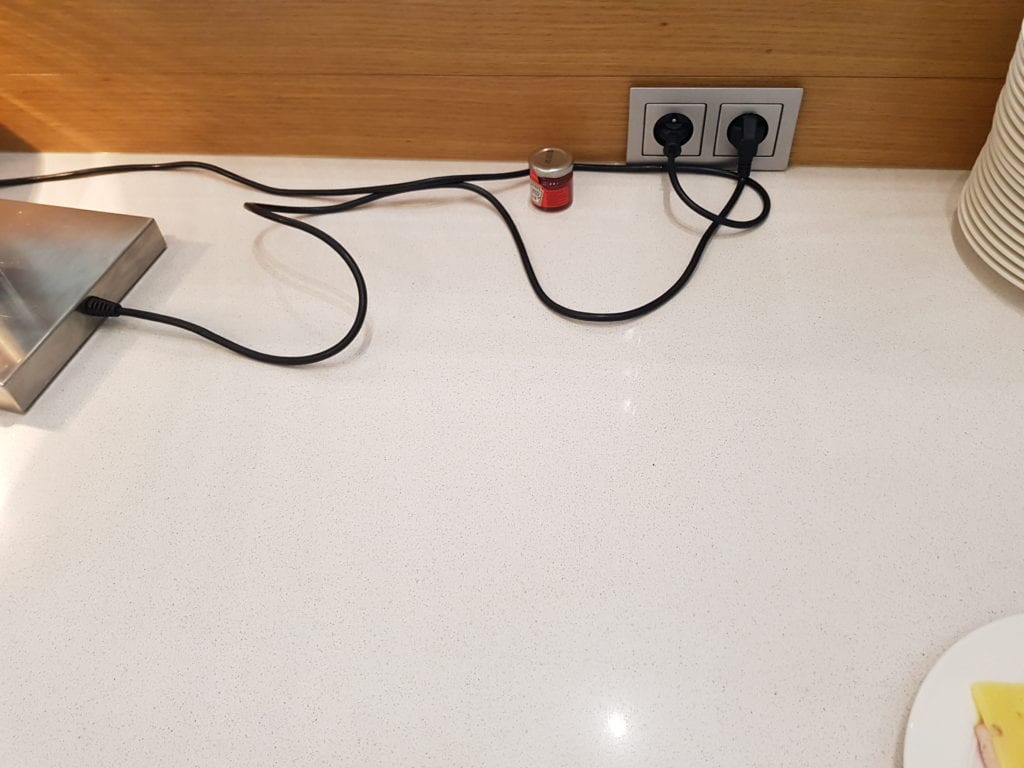 This was definitely the worst part of our stay. Already upon check in, staff at the reception was not impolite, but not friendly either. I asked for a late checkout due to our Gold status. The receptionist serving us was then asking the “supervisor” in French if that was possible, he replied to her really rude in French : “By any means we will not grant this longer than 2pm”. Of course this is not ideal if customer like we do understand French.

At the bar we had a very unpleasant experience. At some point during the evening, staff became pretty rude with all the guests and even the bartenders did not serve the guests drinks at their table anymore. You had to get drinks from the counter by yourself if you were lucky enough to find one of the two bartenders there. Due to this fact we did not leave any tips on our bill. The next day, the cheque slipped under our door showed a wrong amount for both bar bills we had. One was 5€ too high and the another one over 20€ too high. Before having breakfast we went to the reception to clarify this, and then saw that on the first official bill the staff from the bar simply added 5€ in tips in the system despite the fact that on the original slip no tip was included, which was clearly marked by a cross by us. For the second bill, their official,internal bill was simply removed from the original slip so we could not tell anymore where the extra amount came from. Luckily we still had our copy of the bills. It took the staff literally over 20 minutes to figure everything out and at no point some sort of compensation, neither an apology was provided to us.

During breakfast we could not say much about the staff because they were simply not really around.

Upon checkout, we finally had one women who was really friendly and apologized for our inconveniences and said she would look into the bar issue we had.

After the stay I wrote to the Hilton Guest service about our issues with the staff and the bill. An answer was received for our first mail forwarded by global guest assistance to the hotel. We got a reply with an apology and an explanation that the staff at the bar might have thought that a letter in my signature looked like a 5 and therefore added the tip. Of course I was not satisfied with that answer, but my further mails were not replied anymore. Thankfully, we got compensated adequately with points by the global Hilton guest assistance later on.

The usual services like WiFi are provided. Furthermore, a very nice Gym, an indoor pool and even a pool table and table soccer are available in the hotel. This definitely were all nice things to have

In terms of Spa however, it seemed that it was closed during our stay. 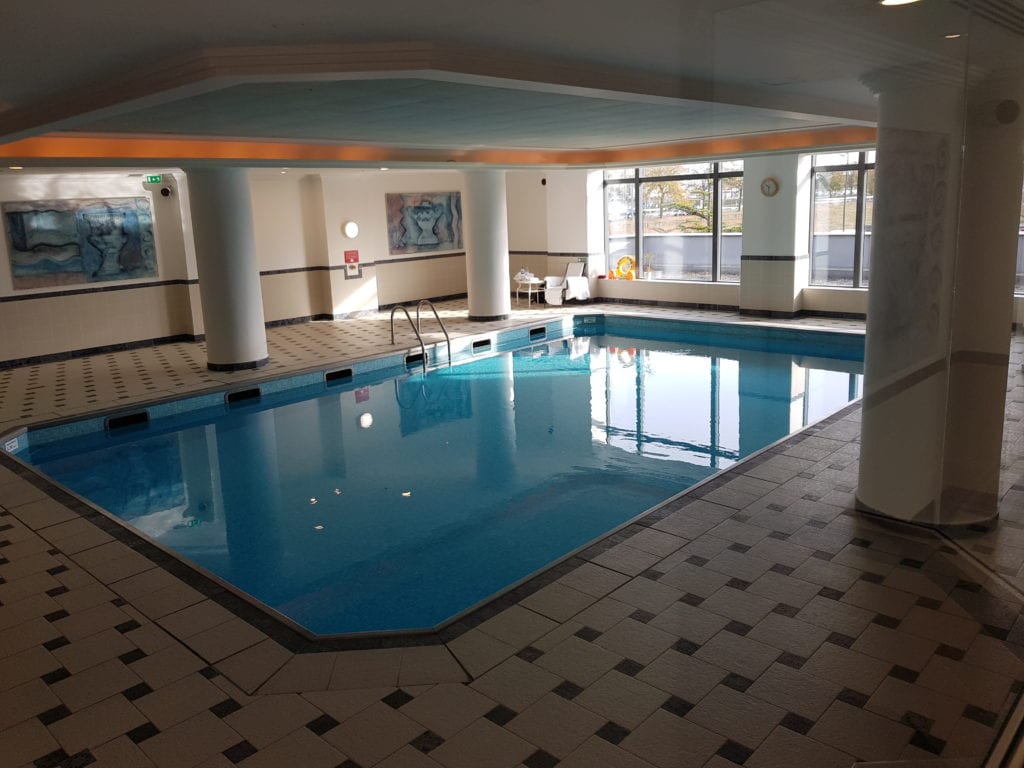 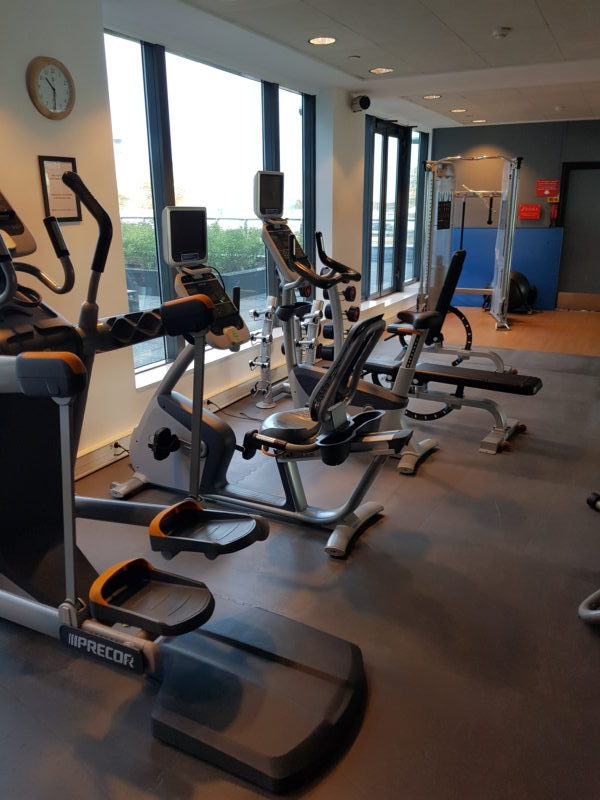 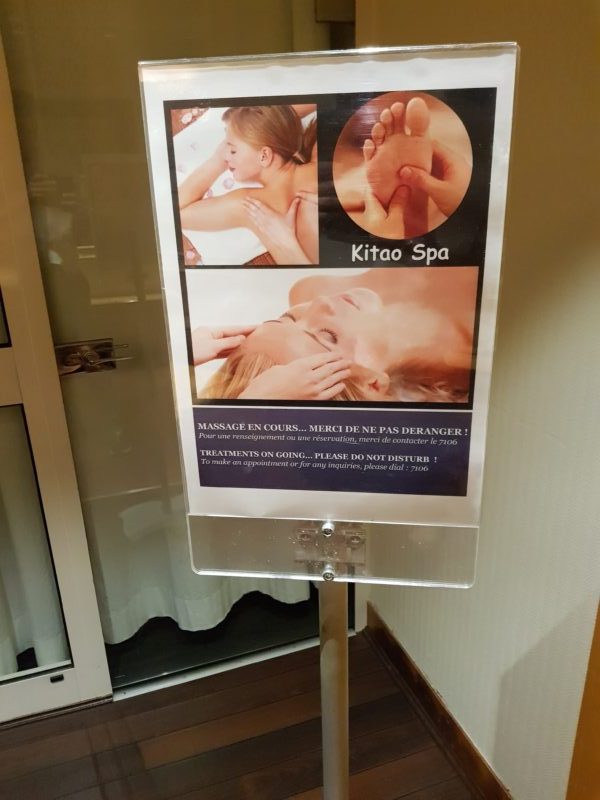 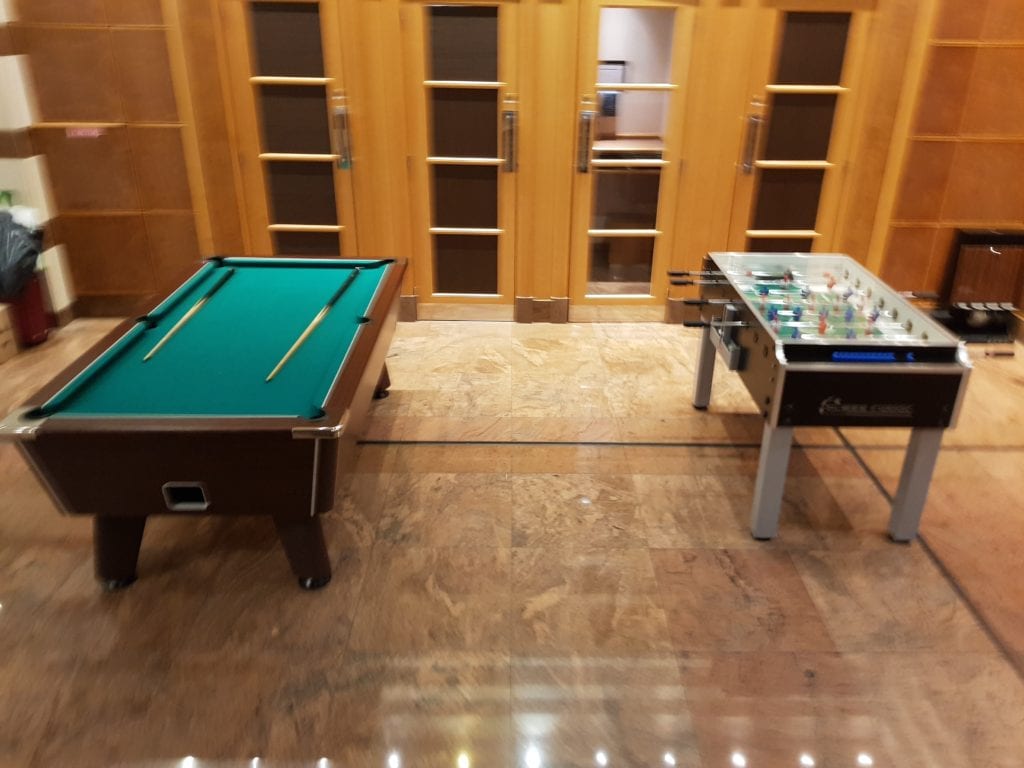 We strongly suggest looking for alternative options at Paris CDG airport. The rooms themselves are spacious and the hotel offers a nice pool, gym and pool table. But due to the fact that not only once, but most of the time behavior of the staff here was unacceptable, we cannot recommend staying at the Hilton Paris CDG airport.