Home » Active » How to use our Search Function 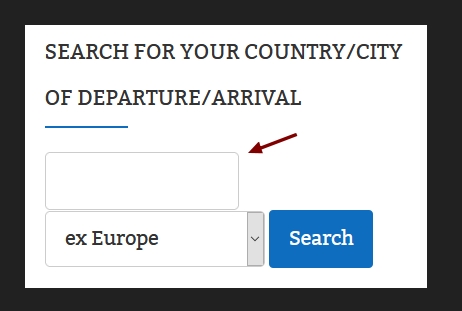 We have been working on our search function to make it easier to use, and we've implemented it as well in our Android and iOS apps.

There are 2 different ways on how to use our Search Function.

On the right side of the page, respectively on top in the app, you will see a Search button where you can enter your desired City/Country of Departure/Arrival.

1. Search by City/Country of Departure.

Let's say you live in Germany, close to Frankfurt and you have no specific destination in mind.

You want to browse through all our active deals originating from Frankfurt. You can enter the city name Frankfurt or the airport 3-letter code, in this case FRA. 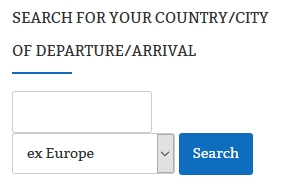 For this example, set the category to “exEurope“, which is set by standard.

(exEurope means with departure from Europe.)

Then you have to enter your city or country of departure.

For this example Frankfurt then hit the Search Button. As a result, you will see all available active deals with departure from Frankfurt.

Of course there won't be hundreds of deals, as you limited your search to those departing from Frankfurt only.

2. Search by City/Country of Arrival.

This is the best way to search if you have a specific destination in mind.

Let's say you are looking for a cheap Business or First class flight to New York.

As for our example you are living in Frankfurt, you leave the category to “ExEurope“, then enter New York or NYC, JFK or EWR as your desired city of arrival and hit the search button.

You will get as a result all active deals that leave within Europe to New York, for example Paris, London or even your home city Frankfurt if a deal is currently available.

With the same logic you can search for deals if you live in New York. You just have to switch the category to “ExNorthAmerica”, and then enter your desired country or city.

To get cheap business or first class tickets you often need to reposition. If the destination is the one you are looking for, and the price is cheap, it often makes sense to buy a separate ticket to the place where the cheap flight originates from.

We wrote more about that topic here, How to find cheap business class tickets.

Our top deals can be found here.